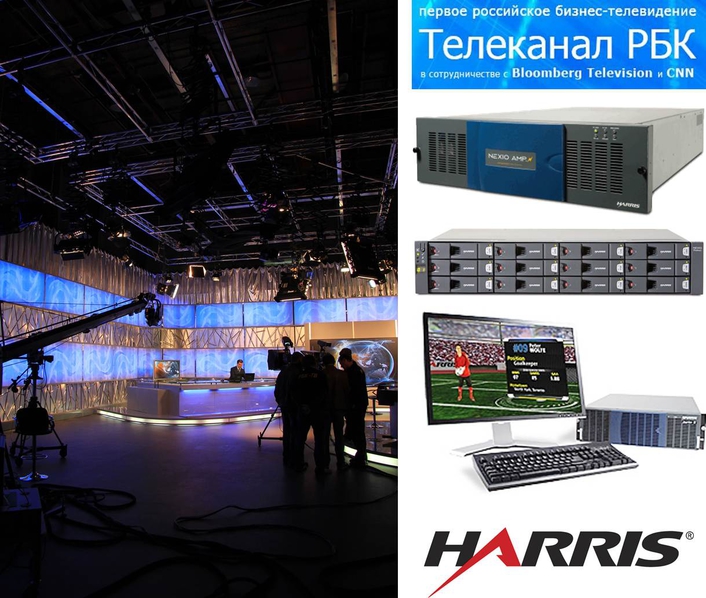 The new Harris infrastructure and workflow solution brings greater operational efficiency to RBC TV by facilitating a tapeless, file-based workflow throughout the facility.  The upgraded system stretches across the workflow from ingest to playout, driving the broadcaster’s news, production and master control areas.

“Harris worked with us every step of the way to develop and design an operational environment that integrates our existing legacy systems into new technologies,” said Mikhail Tereschenko, director of technology at RBC TV.  “RBC TV has already noticed a dramatic increase in operational workflow and efficiency as a result of the upgrade.  Most importantly, the Harris solution makes content easily accessible and easy to modify, enabling us to maximize the value of our existing media.”

“This project demonstrates Harris’ market-leading capabilities to integrate various technologies and products to create a system solution that is uniquely matched to RBC TV’s production needs,” said Harris Morris, president, Harris Broadcast Communications.  “RBC has built an efficient solution to meet today’s challenges with the flexibility to scale and modify the system in the future.”

About RBC-TV
The first Russian 24/7 business news channel RBC TV is the premier source for the business and political elite in Russia. Installed in all branches of Russian government and legislature, RBC TV broadcasts a wide array of business and political news, commentary, interviews, Russian and foreign experts` analysis, as well as economy reviews, in-depth reviews, live reports and the latest business updates from such news agencies as CNN, APTN, Bloomberg, Reuters and CNBC.RBC TV broadcasts its programming to more than 53 million viewers located in over 600 cities across Russia, the CIS and the Baltic states is from the HOT BIRDTM 6 satellite/ on internet