Hardware Analysis based on the 503 HD OB Trucks listed on Live-Production.TV 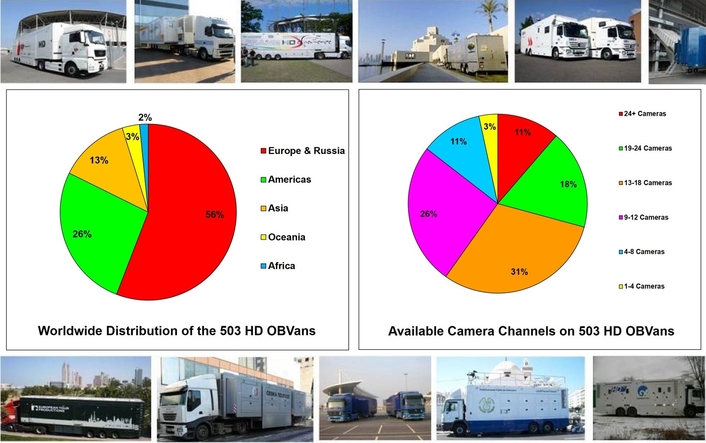 With SD officially dead and HD the status quo, 4K- and HDR-capable trucks — as well as units featuring IP-based infrastructure — are on the rise. Of the 503 mobile units covered in the survey, 49 are listed as 4K-capable.

• Of the 503 trucks whose camera complement was identified by brand 52% use Sony 31% deploy Grass Valley 3% Ikegami and 4% have other cameras on board (Panasonic, Hitachi, Blackmagic, etc.)

• The battle for lens-market share remains a two-horse race. Of the 503 trucks that identified lens brand, 50% exclusively carry Canon lenses, 30% have only Fujinon, and 14% have a mix of Canon and Fujinon lenses. 6% of the trucks carry lenses from other manufacturers e.g. Agenieux.

• In HD replay devices, EVS is once again the industry standard: 87% of the HD trucks were identified as relying on some form of EVS system as its primary replay/ SloMo device. Cur­rently, 8% of the trucks carry Grass Valley K2 Dyno replay systems and 5% carry systems from BLT. Although the majority of them also offer EVS replay systems if the customer demands. Three of the Russian trucks offer Slomo.TV systems.