Hands in the Air for Robe at Amsterdam Music Festival 2016 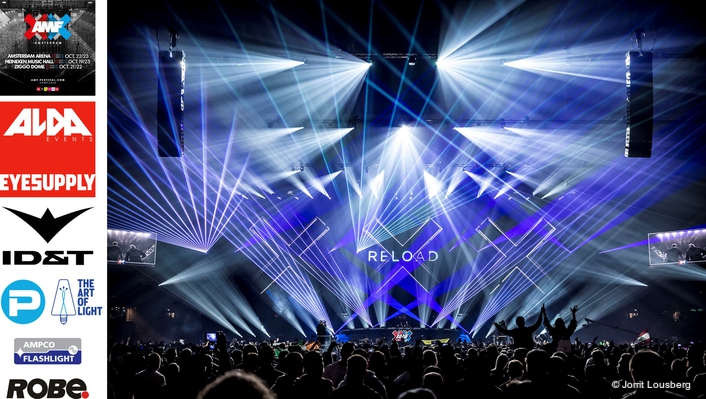 André Beekmans from creative lighting design practice The Art of Light based in the Netherlands produced three stunning lighting schemes and supplied programming / operating crews for the three major live venues at the 2016 Amsterdam Music Festival. AMF is an integral element of the wider Amsterdam Dance Event conference, a 5-day EDM extravaganza staged in the spiritual hub of electronic music and culture. It is a collaboration between organisers Alda Events and ID&T showcasing some of the best EDM talent on the planet.

André and his team also looks after the global creative visual requirements of several leading dance artist including Armin van Buuren, Hardwell, Nicky Romero and Afrojack and have been involved with AMF since it started four years ago. 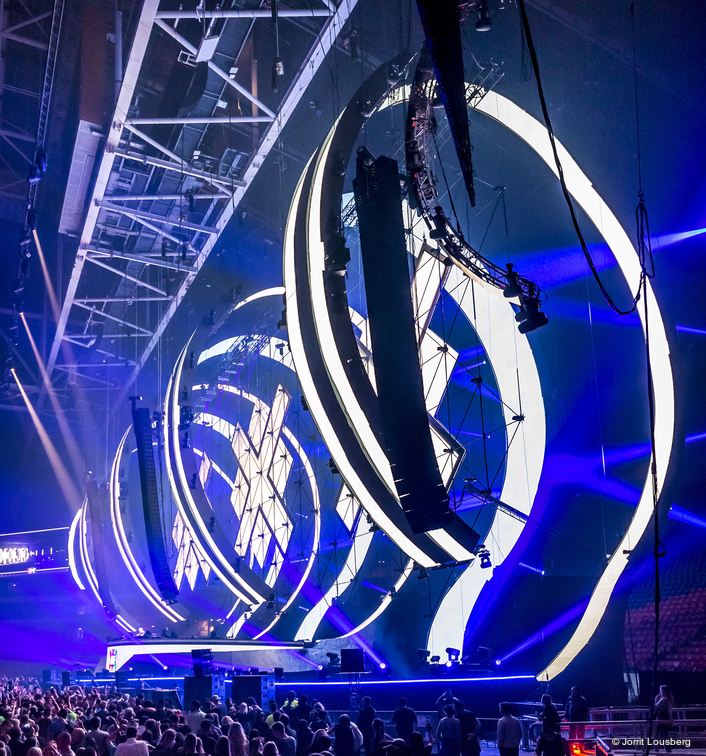 The Amsterdam ArenA operated on Saturday and Sunday nights of the AMF with a festival style set up, and lighting, visuals and set designed to be as flexible as possible. The star-studded line up included all the above three The Art of Light clients plus David Guetta, Axwell & Ingrosso, Alesso, The Chainsmokers, Steve Aoki, Dimitri Vegas & Like Mike plus many more.

The ArenA is the largest stadium in the Netherlands and has a transparent retractable roof which can be opened in the summer, so with the AMF action running from 1 p.m. to midnight, nearly half the performances were during daylight hours. 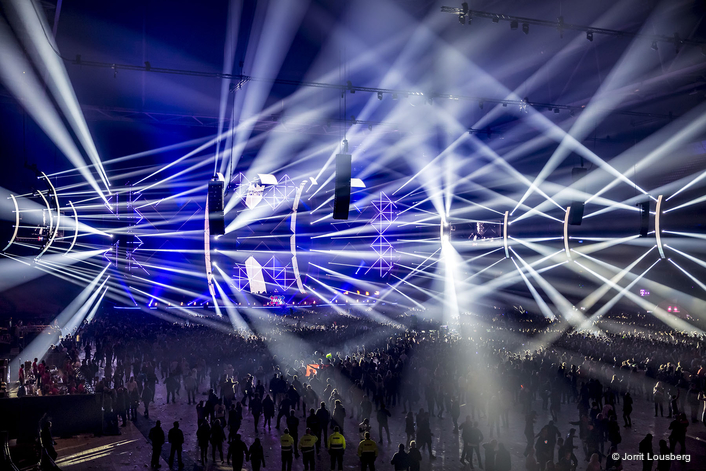 To help combat the daylight, the set designed by 250K included a custom 55 metre wide by 22 metre matrix frame covered with pixels which were applied via a special LED strip product. Flown just in front of three upstage video sculptures made from LED screen, this worked brilliantly as eye candy, providing a visual focus and an additional layer on top of the moving lights.

The matrix was built by Invent Design, and its pixels were mapped by The Art of Light team using a Green Hippo media server. 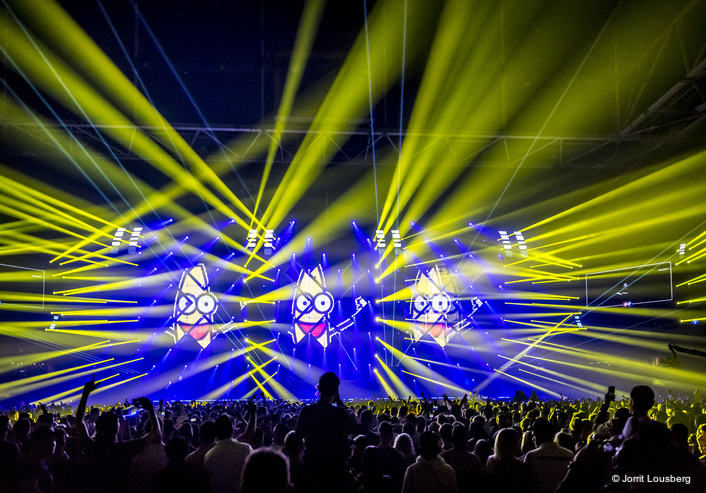 Also part of the set were four upstage / downstage orientated LED hoops which curved around 270 degrees, with a small opening at the downstage edge.

André has worked extensively with Robe products in recent years, utilizing fixtures like Pointes, BMFLS and LEDBeam 100s often on his designs as invaluable tools for ramping up the atmosphere, creating a never-ending variety of diverse and interesting looks and effects.

The BMFLs were his main spots on AMF, rigged in a series of trusses above the stage and audience. "The brightness is fantastic and really helped during the daylight hours" he confirmed adding that “no other moving spot lights” would have worked in this context as, apart from the daylight issues, the trusses were all trimmed at around 27 metres, so the intensity of the BMFL was vital to the design. 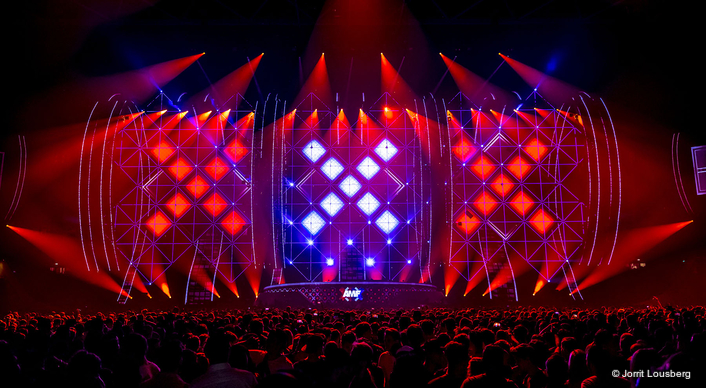 Eleven BMFL Blades were used for front key lighting. Again he needed a super bright source to throw from the 27 metre height, and they needed the shutters for fine-focusing.

Pointes provided the funky array of base looks needed to keep the energy pumping throughout the series of superlative performances, picked for their powerful beams, multiplicity of effects and for being able to double as beams or spots plus the frost filters and prisms.

Twenty-two Pointes were positioned above and around each of the four video hoop arches firing out into the crowd, utilising 88 units in total. They also outlined some smaller offstage video arches for continuity, with the balance on the floor and in the over stage trusses.

The 128 LEDBeam 100s were scattered across the LED matrix at the junctions of the connecting pieces creating their own geometry. These pokey super-fast little lights have become an EDM favourite and worked brilliantly with the pixel effects from the LED strips. Their tiny size means they can be squeezed, suspended or rigged almost anywhere. 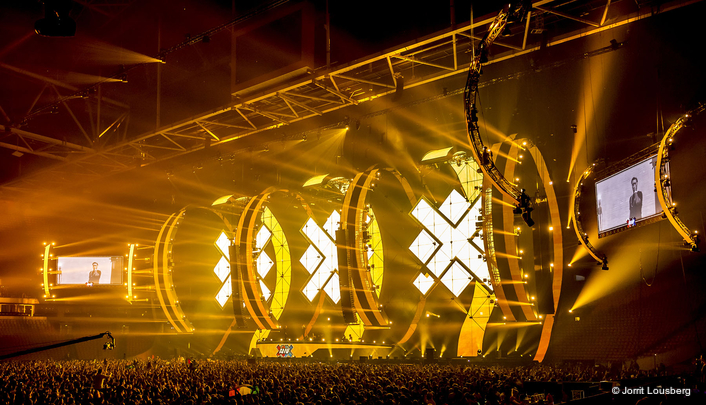 "They were ideal for filling gaps, and can generally make a big contribution to any show for a small amount of budget" says André, remarking that if he had one Euro for every LEDBeam 100 he'd specified on a show in the last four years ... he'd be able to buy a really nice car!!!

Last but not least on the Robe count in Amsterdam ArenA were four LEDWash 600s lighting the DJ booth from the sides.

The lighting operators in Amsterdam ArenA were Michael Seeverens and Bas Scheij from The Art of Light, lighting equipment was provided by Phlippo Showlight with video visuals from Eye Supply. Lighting production was by Virtue Projects.

Just up the road at the Ziggo Dome, 65 Pointes were an important part of the rig supplied by Flashlight which was operated by The Art of Light’s Marco de Klerck. Tiesto headlined the Friday night and Saturday’s line-up was presented by Slam FM, AMF’s own radio station.

At the Heineken Music Hall 45 Pointes joined other lights which were operated by The Art of Light’s Jaap Kamps, with kit supplied by Rentall. This venue ran for four nights, the first hosting DJ Mag’s much anticipated ‘Top 100’ Awards show, followed by Revealed on the Thursday curated by Hardwell and featuring some of his label’s rising stars. Axwell & Ingrosso turned in a stonking headliner set on the Saturday and on Sunday everyone rocked up for the 2016 AMF afterparty, celebrating another hugely positive and successful event.

Overall production for all three of these flagship venues was co-ordinated by Alda with Backbone responsible for delivery of the technical production elements.