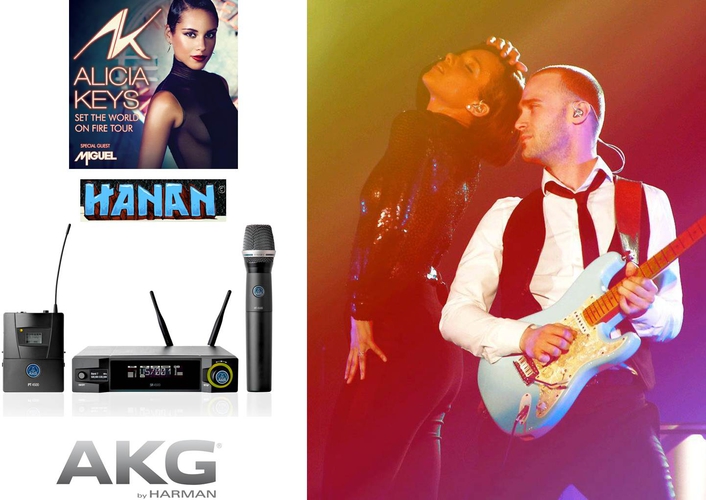 .
Hanan, an Israel-born guitarist, who moved to New York with his family at 12, has built his music career from the ground up, sharing the stage and studio with world-renowned acts, such as Jennifer Hudson, Bonnie Raitt, Steve Jordan, Keyshia Cole, Anthony Hamilton, Gladys Knight, Kanye West, Nas, BB King, and Roy Hargrove, among many others.

The multi-talented musician can wow a crowd on the guitar, bass, keys, drums and nearly any other instrument he can get his hands on. Currently on tour around the globe playing in Alicia Keys’ band, Hanan relies on HARMAN’s AKG WMS4500 wireless system to showcase his true, natural guitar sound.

“Until I tried the AKG WMS4500, I was fed up with other unreliable wireless systems in the industry and was seriously considering using a very long cable during shows,” stated Hanan. “Most wireless systems I’ve played with affect my sound negatively, especially the high end. The shimmer of the guitar and tone depth are lost. With the WMS4500, it’s not about what the system is providing, but what it’s NOT taking away.”

Hanan plays lead guitar on Alicia Keys’ international “Set The World On Fire” Tour.  With more than 100 scheduled performances, the show is traveling through North America and Europe in 2013 and boasts a tremendous stage and set.

During the performances, the wireless solution allows Hanan to participate freely – walking, running and dancing around stage with the multiple GRAMMY® Award-winning Keys.

“The WMS4500 Is significantly better than everything I’ve ever used,” Hanan continued. “AKG is off the chain! It facilitates my movements around the stage and I can put on the best show fans expect from Alicia Keys.”

HARMAN designs, manufactures and markets a wide range of audio and infotainment solutions for the automotive, consumer and professional markets — supported by 15 leading brands, including AKG®, Harman Kardon®, Infinity®, JBL®, Lexicon® and Mark Levinson®. The Company is admired by audiophiles across multiple generations and supports leading professional entertainers and the venues where they perform. More than 25 million automobiles on the road today are equipped with HARMAN audio and infotainment systems. HARMAN has a workforce of about 13,400 people across the Americas, Europe and Asia, and reported net sales of $4.4 billion for year ended June 30, 2012.