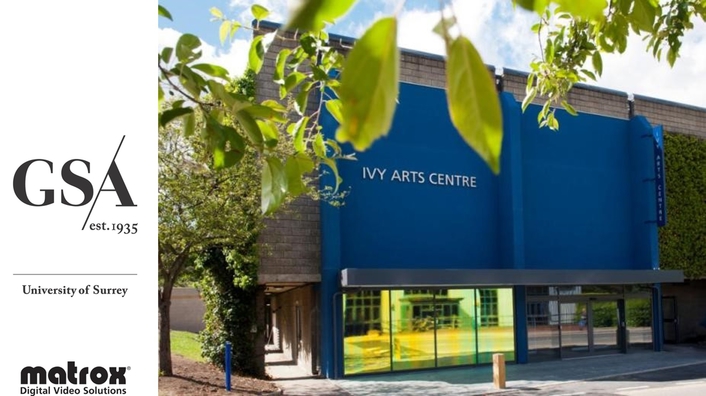 The Ivy Arts Centre on University of Surrey Campus where the productions, that are also streamed using Matrox Monarch HD, take place

In general, art and theatre patrons are keen to view and support manifold performances. The dilemma they face on which performances to pick and travel to attend is reduced to an extent by the ability to view the live streams of these same shows from across the world. 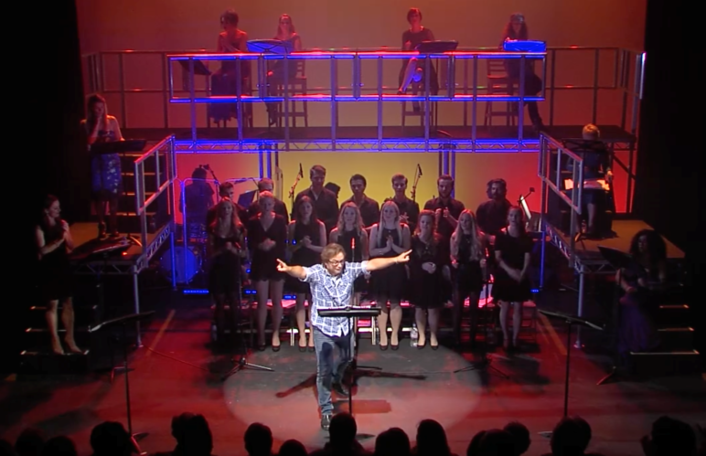 For the launch of their musical, Comrade Rockstar—written and produced in-house and performed in GSA’s main theatre, the Ivy Arts Centre—GSA worked towards streaming the event live to guests worldwide. These guests were interested in developing the production but were unable to make it to the launch. By selecting the Matrox Monarch™ HD streaming and recording appliance, GSA was able to stream the entire two-hour sold-out show with a seating capacity of 200 to viewers located all over the globe, and almost doubled its audience.

Chris Watling, digital media specialist at the University of Surrey says, “We had looked at other disjointed systems—for example, adding recording devices into our setup—but really wanted the simplicity of an all-in-one solution that the Matrox Monarch HD presented. We were looking at taking away the computer from the streaming process; having a dedicated box that can stream and record was attractive to us as it frees up other resources and reduces set-up time.” 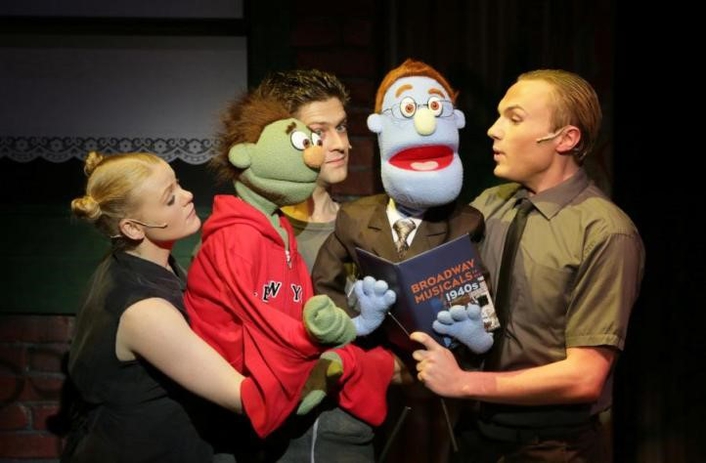 The 18m x 18m Ivy Arts Centre theatre has a 48-port Category 5 patch bay for connecting to cameras and other devices. A JVC GY-HM150E camera is attached to a grid and a host of other cameras are added as needed. GSA normally sets its cameras to output 1080p25 or 720p50 with the encoding setting in the Monarch HD matching this.

For the Comrade Rockstar webcast, GSA used a 4K vision mixer to switch between four cameras and a computer feed from a Mac Pro® that dealt with graphics and intermission. GSA took a mixed stereo feed from the sound desk straight into the vision mixer which was passed to the Monarch HD for high-quality audio representation of the live band and vocals. 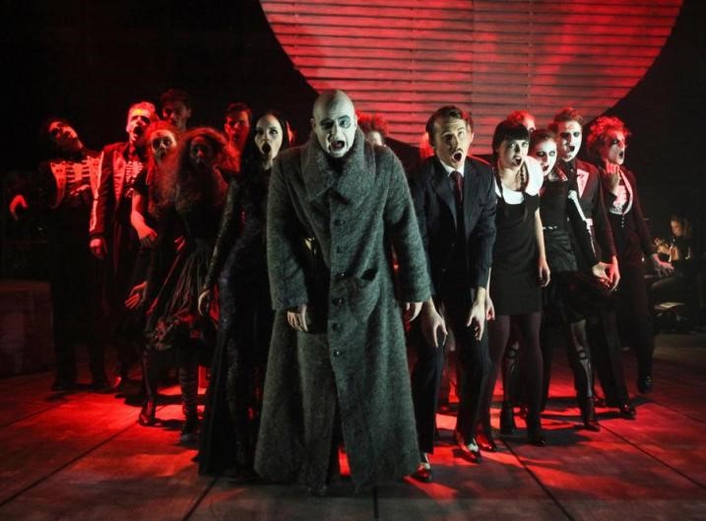 GSA webcasted Comrade Rockstar to external audiences using Monarch HD’s RTMP protocol, at around 8 Mbps (including high-quality audio). For streaming within the building—to dressing rooms for example, so that the cast can see how the show is progressing and not miss their cues—RTSP protocol was used. Here the bit rate was set lower at 1 Mbps to ensure stream reliability since quality was not as paramount. Being GSA’s first major foray into live streaming, they experimented with different streaming providers; originally thinking of YouTube, they settled on HitBox due to problems with access to YouTube in Germany.

Besides streaming, GSA also uses the Monarch HD in its theatre as a recording-for-archive system, recording at 5 Mbps. The Monarch HD’s versatile developer application programming interface (API) was used to easily automate the recording of shows. Previously, GSA had to manually deal with hard-to-access cameras connected to the ceiling grid for recording. GSA also records all practise-based assessments in the school (hundreds per year) which are archived and shared via its lecture capture and virtual learning environment (VLE) platforms. Currently on the lookout for a more flexible system to capture classroom activity, GSA is evaluating the Matrox Monarch LCS appliance, which is specifically designed for lecture capture. 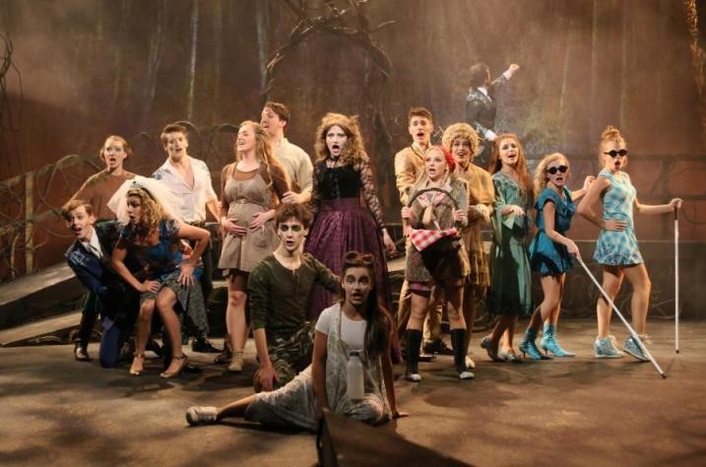 Into the Woods, a show performed by Guildford School of Acting students, recorded using the Matrox Monarch HD streaming and recording appliance for archiving and sharing for assessment purposes

With the Monarch HD’s API, GSA has automated its streaming and recording schedules. Watling remarked, “The Matrox Monarch HD has helped to take the mystery out of streaming. No longer do we need to dedicate a complex computer-based solution to our streaming setups. We can approach streaming proposals with confidence and also use the recording features of the Monarch HD to add further value. This means that we can capture and distribute more content with less work. We are also able to leave people who are non-tech savvy in charge of capturing our performances and even running a basic stream themselves.” 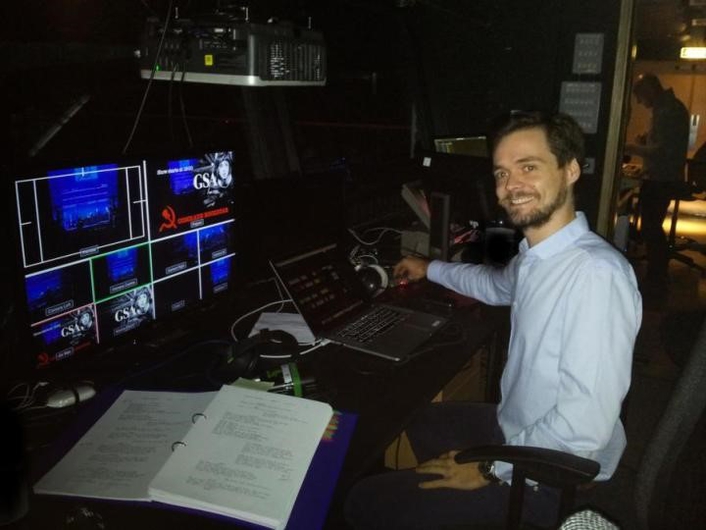 Matrox Monarch HD H.264 encoder in operation at the Comrade Rockstar show launch by the Guildford School of Acting

GSA is considering using Monarch HD to expand capacity, offering a live stream to the box office foyer for those absent from the theatre, or even possibly creating a screening room for a second audience when performances take place in smaller, limited-capacity studios and there is overwhelming demand for tickets.