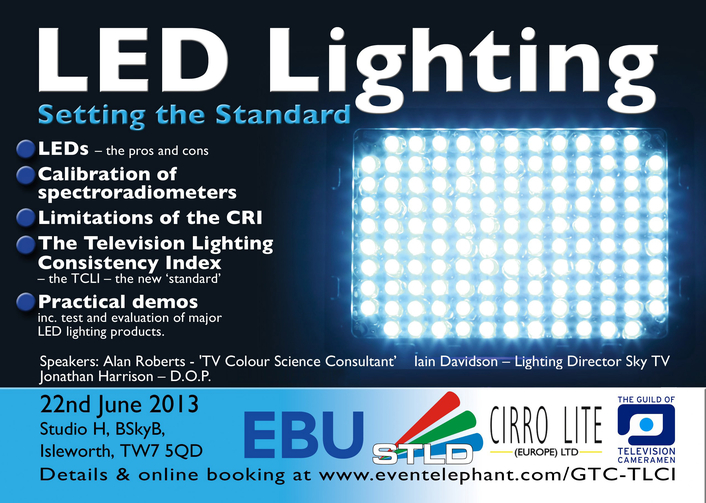 A seminar and workshop on television lighting will be held on 22 June 2013 at Sky Studios in Isleworth, London, featuring the work done within the EBU LED project. The event is organised by the GTC (the Guild of Television Cameramen) in association with the STLD (Society of Television Lighting and Design).

The seminar will include presentations on spectroradiometer calibration, the Colour Rendering Index and the Television Lighting Consistency Index. Practical demonstrations and evaluations of commercially-available LED lighting productions will also be given.

Attendees are invited to bring along whichever meter they use for colour temperature measurement.

GTC and STLD sponsors will be supplying a range of LED lighting for test and evaluation including Dedo and KinoFlo lamps from Cirrolite and the new L series luminaires from ARRI. Lamps from other manufacturers will be confirmed prior to the workshop. Full details and online booking can be found at www.eventelephant.com/GTC-TLCI

Tickets for GTC and STLD members cost £20 and for non-members £80.

The apparent advantages of LED lighting for film and television use have been discussed ever since the emergence of the first LED luminaires. Low power consumption, higher light outputs/watt, light-weight construction, low heat emissions and variable colour temperature settings have combined with falling production costs to produce a burgeoning market in LED luminaires for film, TV and stills photography.

With predominantly lower-priced Chinese-manufactured units increasingly filling the market place, in addition to the well-known and long-established companies in the West, more attention is being paid to the problems of correct colour performance especially when mixing sources.

The well-known Colour Rendering Index (CRI) has always been the standard for the measurement of tungsten light sources, although its limitations have been known for over 30 years. When applied to fluorescent lighting. it was found to be considerably inaccurate and misleading. Around 1970, work started on the Television Lighting Consistency Index (TLCI) after an initial system was proposed in Germany which was intended to do for television what the CRI was then doing for general lighting.

The TLCI was developed using the colour science of the period but finally came to nothing. The project lay dormant until 2010 until former BBC broadcast engineer and colour sciences specialist Alan Roberts was asked to measure a new LED luminaire. He learnt about the CRI and was troubled by its limitations. As a result, the EBU LED project was set up, chaired by Per Boehler from the Norwegian Broadcasting Corporation (NRK). Within a year, an algorithm was finished, including the subjective testing of CIE (International Commission on Illumination) colour difference algorithms.

As a result of the publicity surrounding the project, many people wanted to use the TLCI and have bought spectroradiometers on the recommendation of the project group at the EBU booth at IBC 2012. These started at the entry level (Alan Roberts’ spectroradiometer “ASEQ - LR1” cost $600 Canadian) rather than at the laboratory level which can cost $10k or more.

Within the EBU LED project, Alan Roberts has written the TLCI-2012 software to deal with some of the problems inherent in spectroradiometers and Per Boehler has experimented with optical improvements to the cheaper unit they were using. The unit originally had no calibration process but this has now been incorporated. A known source was also needed for all to use in the calibration process. Per Boehler has identified an old standard source, recalibrated by IRT in Germany which is also part of the LED project group. This will be made available to anyone wishing to calibrate a spectroradiometer for TLCI use.

A calibration service will soon be offered by John Emmett of Broadcast Project Research in Teddington, plus an 'improvement' service for those with entry-level spectroradiometers, such as the ASEQ - LR1 Compact Spectroscope, to radically improve their performance. This will be a commercial operation, rather than a free service. There will also be training for all those who aren't experienced physicists so they can work out the calibration for themselves.

"The top LED luminaire manufacturers are already tooled up for this for this type of calibration," says Alan Roberts, "but the smaller ones are not, and they are the ones likely to be making the cheap luminaires which give all the problems - that's who we have to concentrate on."