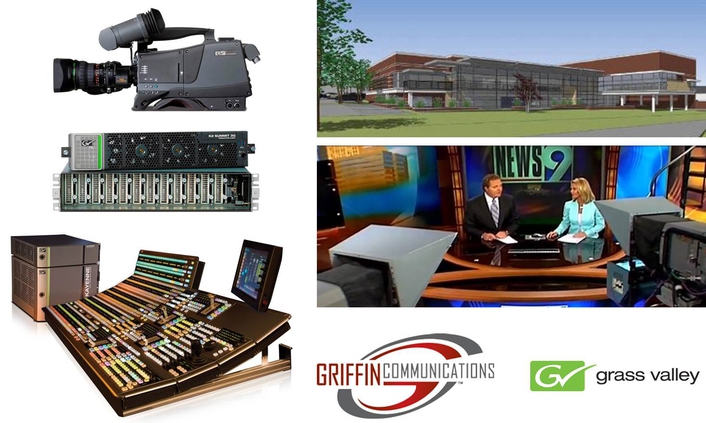 Griffin Communications Continues Partnership with Grass Valley HD Production and Playout Technologies
Independent station owner Griffin Communications, LLC is putting the finishing touches on a brand new, all HD broadcast facility in Tulsa, Okla.—as the home of News On 6, KOTV, the local CBS affiliate and The Tulsa CW, KQCW, the local CW affiliate—and equipping it with several high-definition (HD) cameras, a new HD video production switcher and several of the latest generation of HD media servers from Grass Valley®. Griffin Communications has been a long-time user of Grass Valley solutions in its existing facility, from which it began broadcasting in 1949.

The Grass Valley multiformat production equipment will help News On 6 streamline its production operations by enabling the file-based recording of incoming feeds, clip management, and playout of a variety of network-supplied and locally produced programming.

The new broadcast facility, which was built from the ground up beginning in October  2011, is set to be fully operational in January, 2013; originating News On 6 and Tulsa CW, plus two digital subchannels (“News on 6 Now”, and “ThisTV”). Master Control and the new Grass Valley servers will begin operations in the new building December 2012.

“News On 6 will now have much more space for its staff and equipment and will be able to do so much more with the Grass Valley technologies being installed,” said Gerald Weaver, News On 6 Chief Engineer. “Grass Valley has always offered a dependable product that we have come to rely on and we use it to its fullest extent. The Kayenne switcher in particular, in our opinion, is the finest on the market today and is clearly the best product for our purposes, which is to produce a wide variety of program types, including the 39.5 hours of local news we produce each week.”

News On 6 has used Grass Valley production switchers for many years—starting with a Grass Valley 300 and most recently moving on to a Kalypso®  switcher—due to the technology’s reliability and cost-effective performance. For the new facility, the station has added a new Grass Valley Kayenne® Video Production Center switcher. The switcher will handle the signals from four Grass Valley LDK 4000 Elite HD cameras, currently in use in the station’s existing news studio.

News On 6 has also added two next-generation K2 Summit® 3G server frames and several terabytes of storage capacity to its existing complement of Grass Valley K2 Summit servers that they have been using for several years. The new K2 Summit 3G servers will be used in tandem with a Harris automation system to handle incoming and outgoing programming and news feeds as digital files.

“The best thing I can say about Grass Valley’s servers is that we never have to think about them, that’s how reliable they are,” added Weaver. “We set them up and they work exactly as planned.”