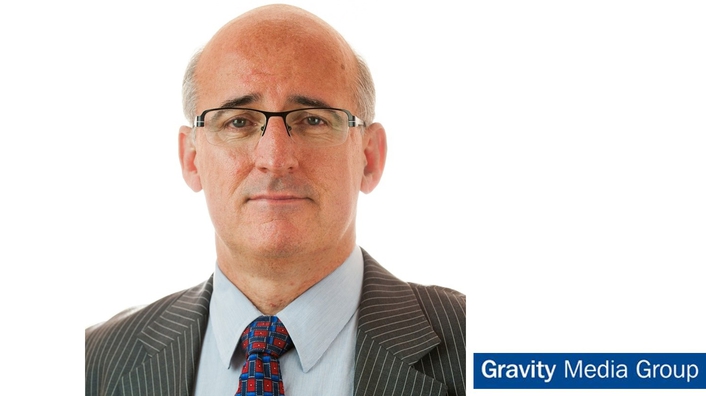 Gravity Media Group has promoted its Business Development Director to new CRO position. Eamonn Dowdall will be responsible for revenue streams across GMG, focussing on increasing sales and business development globally. He has been with GMG since 2000 when he joined subsidiary business Gearhouse Broadcast as Commercial Director.

Gravity Media Group (GMG), the owner of worldwide production and broadcast services specialists Gearhouse Broadcast, Hyperactive Broadcast and Input Media, has appointed Eamonn Dowdall as its Chief Revenue Officer. Eamonn has been promoted to CRO from his current position as GMG’s Business Development Director, where he has helped drive significant worldwide growth. In this new role, Eamonn will report directly to CEO John Newton and focus on increasing sales and business development globally as part of his overall responsibility for the revenue streams across GMG.

Eamonn has been with GMG’s subsidiary business Gearhouse Broadcast since 2000, where he joined as Commercial Director, and was then promoted to MD of the UK division. More recently he has concentrated on Group sales. He previously spent 14 years with Sony’s Broadcast & Professional division, working in a variety of market segments before becoming its General Manager.

“I am extremely excited to be taking on this newly created position at an exciting time in the industry with 4K, remote production and IP technology at the forefront of our solutions and research and development,” said Eamonn Dowdall, Chief Revenue Officer at Gravity Media Group. “I’m looking forward to focusing on the global expansion of services and offerings across the Group’s subsidiaries.”

The creation of this new role is part of Gravity Media Group’s strategy to further enhance its worldwide offering to customers who are having to continuously adapt to meet new challenges being thrown up by the changing media landscape. Following recent investment from TowerBrook Capital Partners to help fund growth, GMG acquired Input Media, one of Europe’s leading sports production companies, so that it can meet industry demand for end-to-end production and facilities capabilities. It has also deployed Columbus, a state-of-the-art 4K mobile unit built by Gearhouse Broadcast specifically to operate in the US live production market.

The announcement of Eamonn Dowdall as CRO quickly follows the promotion of Ed Tischler to MD of Gearhouse Broadcast UK. That move enables Kevin Moorhouse to vacate the position in order to fully focus on being Chief Operating Officer of Gravity Media Group. He’ll continue the Group’s mission of providing outstanding technology, solutions and exceptional support to customers across the globe.

Discussing the announcement, Gravity Media Group’s CEO, John Newton, said: “Given Eamonn’s background, market understanding and in-depth knowledge of our businesses, he’s an ideal choice to drive expansion across the Group and help further increase our global footprint. I’m delighted that we’re able to continue to develop and reward our outstanding in-house talent. These recent promotions will let us be more focussed in helping our customers deliver more technically advanced and operationally efficient productions, while ensuring they continue to receive the quality of service that we are renowned for.”

Gearhouse Broadcast is a market leader in the field of broadcast services and specialises in broadcast equipment rental, project solutions and systems integration. Operating globally from its offices in the UK, US, Australia, France and Qatar, the company offers huge experience and a proven track record in delivering major sporting and entertainment events.

Hyperactive Broadcast was founded over 30 years ago and is a leading service provider to the broadcast, television and feature film market, supplying people and equipment to support the non-linear editing and broadcast hire needs of its customers. In 2015, it worked on projects as varied as the Grand National and the French Open Tennis to Springwatch and Fifty Shades of Grey.

Input Media is one of Europe’s premier sports production companies, with blue-chip clients around the world.  We employ a talented team of producers, directors and editors who are dedicated to producing creative and engaging programming and digital content for a wide variety of clients.