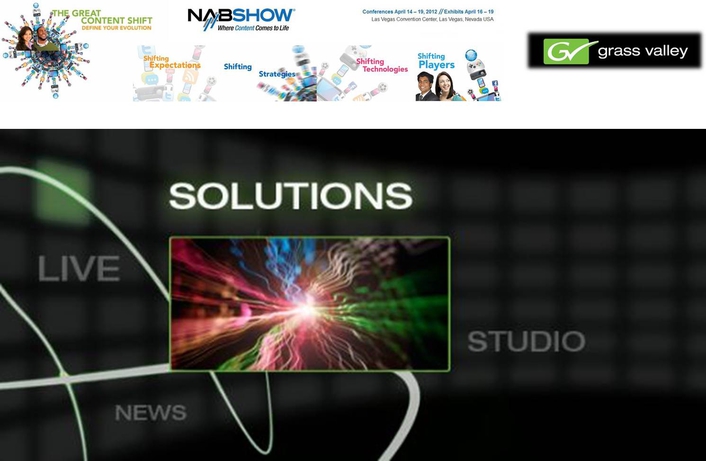 At the NAB 2012 Show Grass Valley™ is beefing up its K2 Summit™ media server platform with a host of new features and functionality that make it more flexible than ever, while supporting next-generation, tightly integrated file-based workflows for playout and production applications. Among a long list of new features, there’s support for AVCHD and H.264 file playback, as well as proxy encoding that can be both recorded and streamed over a network. 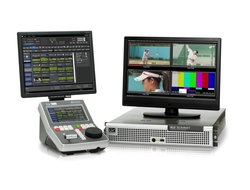 These new features are incorporated into the K2 Summit 3G server and represent the next logical step in the migration of the extremely flexible record and playout platform to support Grass Valley’s innovative STRATUS™ Media Workflow Application Framework software. The new server architecture has all of the core services that allow users to perform control and asset management tasks through an IT-centric service oriented architecture (SOA) layer.

Through a software update that will be available later this year, the new K2 Summit 3G server will become 3 Gb/s (1080p50/60) capable. To handle the extra data of 3G signals, 7.2 TB of storage capacity is available as an option.

“The K2 Summit product line has progressed nicely according to our previously stated roadmap, helping our customers migrate to the highest image quality when they are ready, while preserving their initial investment,” said Charlie Dunn, Executive Vice President of Products for Grass Valley. “The new K2 Summit 3G addresses the next step in file-based workflows by supporting a variety of HD file formats and device control applications.”

The new K2 Summit 3G is designed to integrate seamlessly with previously deployed Grass Valley Storage Area Networks (SANs), or it can be used as a standalone server. Going forward, it will become the base server for the increasingly popular Grass Valley K2 Dyno™ Replay System, and will help power replay and studio applications for  720p/1080i 3D and, with the 3G software update available later this year, 1080p50/60 productions. 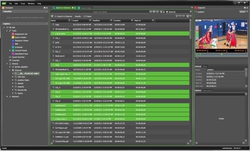 Like its predecessor, the new K2 Summit 3G provides 6 in and 1 out or 4 in and 2 out configurations for the K2 Dyno Replay System or eight record streams in Multicam mode, when using Grass Valley’s ChannelFlex™ technology. Also included with the release of the K2 Summit 3G are additional features within ChannelFlex, such as full native support in Multicam mode for MPEG-2 compression including XDCAM HD format.

At NAB 2012, Grass Valley™ is adding to the flexibility of its 3G Camera Transmission system (introduced at NAB 2011) with the LDK 4427 3G Fiber Camera to 3G Triax Converter, allowing users producing programs in resolutions up to 1080p50/60 to send their signals across any type of cable infrastructure. The LDK 4427 performs a 1-to-1 conversion of a 3G fiber camera signal to a 3G triax signal. Ancillary data—such as return video, control and intercom—are also converted on a 1-to-1 basis, with full access to all transmission diagnostics at any time. 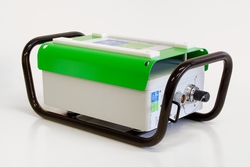 “With the new LDK 4427, the 3G Camera Transmission family of products is complete and Grass Valley now offers the ultimate in camera transmission flexibility,” said Marcel Koutstaal, Senior Vice President of Cameras for Grass Valley. “With all of our 3G Camera Transmission systems, there is absolutely no compromise in quality and each converter allows customers to get even more value out of their camera investment.”

The Grass Valley LDK 4427 is built to withstand extreme weather situations, conforms to the IP54 safety standard (ensuring that it is dust- and waterproof) and comes standard with a sun hood and a rugged camera-mounting bracket. It can also be placed in a standard 19-inch rack where up to four units can be mounted side-by-side.

Grass Valley's 3G Triax transmission system is the world's first and only triax system that delivers all HD video formats: 720p, 1080i, and 1080p, from the base station. It’s compatible with the LDK 8000 Elite and LDK 4000 Elite HD camera heads.

Pricing and Availability
The new LDK 4427 3G Fiber Camera to 3G Triax Converter will be available in May with a list-price of $24,853.

Squarely focused on continuing to exceed the expectations of its customers with enhancements to its current product lines and to preserve customers' investments, Grass Valley™ has added additional functionality to its Trinix™ NXT Multiviewer for SD, HD, and 3G. This powerful multiviewer can be added as an option to all Trinix frames worldwide and any Trinix frame ever sold. The latest enhancements include on-screen mouse and cursor functionality to expand individual tiles to full screen, powerful signal monitoring, status, alarming functions and the ability to easily import and export configurations for pre-determined screen layouts.

At NAB 2012, Grass Valley will show this high-quality multiviewer integrated into its Trinix NXT routers, eliminating the need for additional cabling and other hardware—leading to a more reliable multiviewer. The multiviewer option supports infrastructures up to 3 Gb/s while providing up to eight HD-SDI multiviewer monitor outputs per card—including the ability to monitor audio for each source.

“Even with all of its new features, the Trinix NXT Multiviewer optimizes space by eliminating secondary, external components and connections,” said Karl Schubert, Senior Vice President of the Video Products Group for Grass Valley. “The Trinix NXT Multiviewer is ideally suited to monitoring within all types of broadcast control rooms, live production and distribution facilities and especially mobile trucks. Customers continue to commit their infrastructures to Trinix because the platform continues to grow and expand with their needs.”

Each multiviewer board includes 32 scalars with all inputs and outputs on each board supporting all video standards (from 480i to 1080p). By using the card’s cascade capability, the system can also support more than 128 images on a single output without rescaling the cascaded signals.

Asymmetric Router Frames with Multiviewer Support
Expanding the Trinix product line, Grass Valley offers a series of asymmetric router frames, in matrix sizes of 128x256, 256x512 and 512x1024 (each in a single rack) all of which support the Trinix NXT Multiviewer using standard BNC connectors for high-performance and reliability or with the Trinix Fiber I/O option.

These asymmetric router frames target both green-field system installations as well as those looking to expand their existing high-performance, mission-critical signal routing needs in an unbalanced, asymmetrical way for users requiring additional outputs and in applications where an integrated Multiviewer is needed.

Pricing and Availability
The Trinix NXT Multiviewer and asymmetrical frames will be demonstrated at NAB and are available now. Pricing is dependent upon configuration.