Grass Valley can be found at stand A50 at NATEXPO, Pavilion 75, International Exhibition Centre, Moscow, November 23 to 25, 2011
Grass Valley™ is bringing its latest products and technical strategies to the NATEXPO convention (Moscow, November 23-25, 2011). The demonstrations will show how broadcasters can build uncompromised, file-based solutions cost-effectively, while adding new creative capabilities that deliver commercial success.

One of the most acclaimed of all the new product introductions at IBC2011 in September was the Grass Valley Karrera™ Video Production Center switcher. The new system brings the creative firepower of the Kayenne™, the most powerful and advanced switcher in the industry, to a mid-market price point, winning it a lot of attention from broadcasters seeking to maintain production values on ever-tightening budgets. One of the benefits of using the Karrera is its ability to output multiple programs simultaneously—at NATEXPO 2011—alongside a 3 M/E panel, it will be demonstrated with the innovative new 1 M/E touch-screen interface.

As well as leading the market in production switchers, Grass Valley has leveraged its vast experience in cameras to offer two important new developments that will be demonstrated at NATEXPO 2011. The unique 3G Transmission system allows the same fleet of cameras to be used with either triax or fiber connectivity. It means an outside broadcast company can get better utilization of its equipment stock while moving seamlessly from a football stadium with pre-installed triax to a skiing event with fiber runs of 5 km or more.

The entry level Xensium™-based LDK 3000 HD camera has been updated to the LDK 3000+. This is a major software upgrade adding important functionality including secondary color correction and, in association with digital lenses, the ability to fine tune for chromatic aberration, which in turn leads to sharper pictures, as well as more consistent color across the frame. For current LDK 3000 users, a field upgrade package is available at an attractive price point. The LDK 8000 Elite camera which now supports the new Grass Valley 3G Transmission over fiber and triax will also be on display. 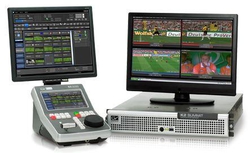 The Grass Valley presence at NATEXPO 2011 will demonstrate the company’s ability to deliver complete modern workflows in end-to-end solutions. The STRATUS™ Media Workflow Application Framework software platform, running on the K2 server network, will be demonstrated, as well as the EDIUS® multiformat, nonlinear editing software and the K2 Dyno™ HD Replay System (which is a powerful combination of the Grass Valley K2 Dyno controller and the K2 Summit™ production client server).

Grass Valley can be found at stand A50 at NATEXPO, Pavilion 75, International Exhibition Centre, Moscow, November 23 to 25, 2011.