Grass Valley Editing Gets into the Swing for the Ryder Cup 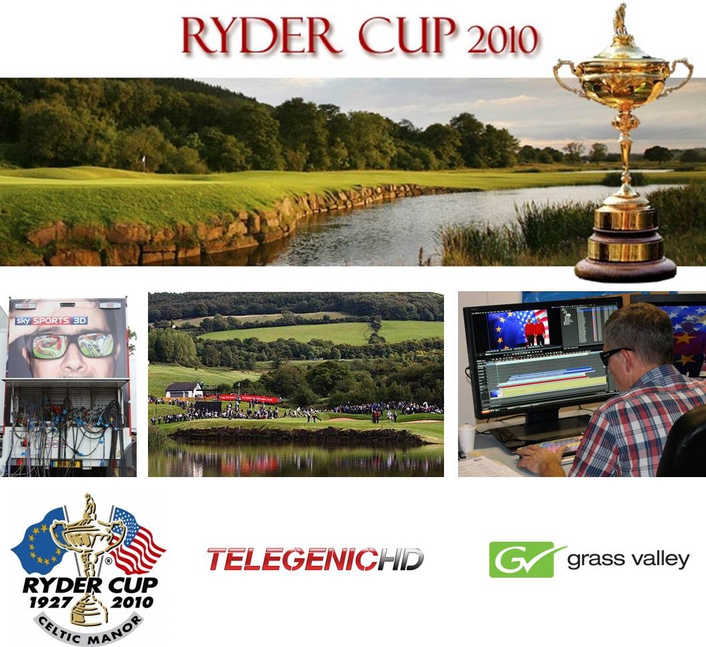 3D clips and player profiles (with two channels of key and fill) sent to T18, Telegenic’s dedicated 3D truck
Leading outside broadcast facilities provider Telegenic built its Ryder Cup coverage – seen across Europe and North America – around a network of Grass Valley™ EDIUS® edit workstations. The networked facilities handled all of the onsite editing for highlights and replay packages, including 3D coverage.

A total of 12 EDIUS systems were used: 10 EDIUS workstations connected to a Grass Valley K2 Summit™-based Storage Area Network (SAN) which received all the appropriate feeds from the outside broadcast trucks, while senior producers used a further two EDIUS laptop editors. Finished packages were delivered to a K2 Solo™ media server in Telegenic’s truck T14, with stereoscopic 3D clips and player profiles (with two channels of key and fill) sent to T18, Telegenic’s dedicated 3D truck.

This year’s Ryder Cup, which is the biennial team competition between the finest golfers in the USA and Europe, took place at Celtic Manor in Wales at the beginning of October. Very heavy rainfall and the resulting changes to the schedule added to the typical Ryder Cup challenges of multiple simultaneous matches with no idea where the drama on the course will take place until it happens. To adequately cover the complex event, Telegenic relied on Grass Valley’s sophisticated EDIUS networked editing solution to fill the rain delays as well as to create a 2 ½ hour highlights program each evening.

“The Ryder Cup is a massive undertaking for any broadcast contractor, and we need to use equipment that we could trust to perform productively and flawlessly,” explained Peter Bates, Managing Director of Telegenic. “We have used and recommended EDIUS for some time now, and in conjunction with the flexibility of the K2 Summit media server we can build a very fast system.

The Grass Valley EDIUS nonlinear, multiformat editor is widely recognized for providing fast and intuitive performance, but to boost productivity even further Telegenic also used the EDIUS XRE conforming engine. This shadows the main editing systems and takes over non-productive tasks such as rendering and conforming high-resolution versions, freeing up the edit workstations for further productive work.

“This year the editors were under even greater pressure because of the rain delays,” added Bates. “The technology worked just as we planned, and gave our clients from Sky a great workflow, particularly in allowing them to build the evening highlights program, going to air with growing files as the elements were completed.”

“The Ryder Cup is one of sport’s great events, and capturing all the excitement calls for great – and very fast – editing,” said Jeff Rosica, Senior Vice President for Grass Valley. “EDIUS has proved itself over the years as a very productive platform for broadcast editing, and the editing network that Telegenic has built with the K2 media servers gave them a great deal of flexibility. The world really was watching Grass Valley at the Ryder Cup.”