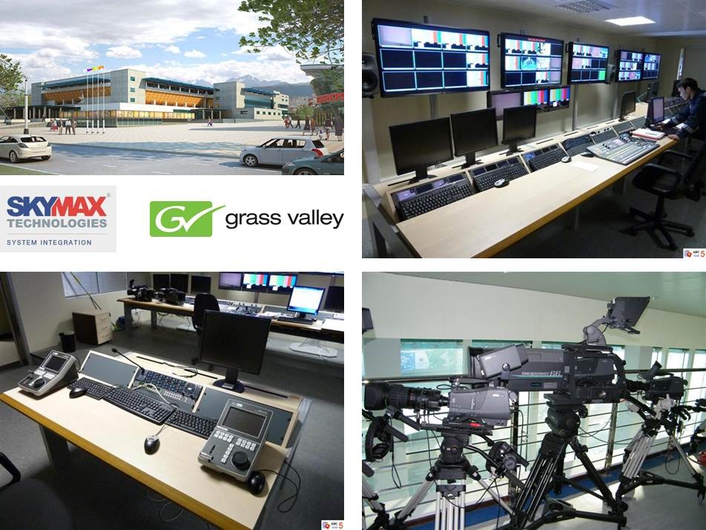 The system includes 8 Grass Valley LDK 4000 Elite cameras, 2 with wireless transmission, as well as 4 LDK 8300 Live SuperSloMos
Grass Valley™ has completed the turnkey installation of a multi-million dollar high definition studio and live sports production system to allow a sports stadium to cover events in house. The new studio gives the Baluan Sholak Sport Palace, in the Kazakhstan former capital of Almaty, unprecedented facilities and the ability to manage its own productions without the need to bring in outside contractors.

The turnkey project, which included graphics from Pixel Power, multiviewers from Apantac, and a Yamaha audio mixer, was designed by Grass Valley in association with its local systems integrator SKYMAX TECHNOLOGIES, based in Almaty.

“The stadium, owned by the city of Almaty, hosts events on international level from ice hockey [it was the venue for the recent Asian Winter Games 2011] to football and boxing, as well as big concerts,” said Erik Shortanbayev, CEO of SKYMAX TECHNOLOGIES. “The city saw an opportunity to now better serve all the users of the stadium by providing all of the modern facilities they would need to produce their own television coverage, reducing costs and increasing turnaround. And thanks to the great support from our partner Grass Valley, that is just what we have delivered.”

“Design and engineering teams from Baluan Sholak Sport Palace, SKYMAX TECHNOLOGIES, and Grass Valley sat down at NAB in 2010 to finalize the requirements and sign the contract,” said Aengus Linehan, Senior Vice President of Global Services at Grass Valley. “We demonstrated to them that we could deliver not just world class products, but a complete turnkey solution without the risks associated with other integrators. And we justified that by delivering the project on budget and on time, giving this remarkable stadium a terrific creative production platform.”

The project included acquisition of the third-party equipment, systems integration, commissioning on site, and training. Following the April 2010 contract signing, systems acceptance testing was successfully accomplished in February 2011, with the training program for the stadium’s team of technicians completed in May. As well as delivering a successful project to the end user, the contract also allowed for detailed knowledge transfer to SKYMAX TECHNOLOGIES, giving it technology leadership in the Eurasian region.