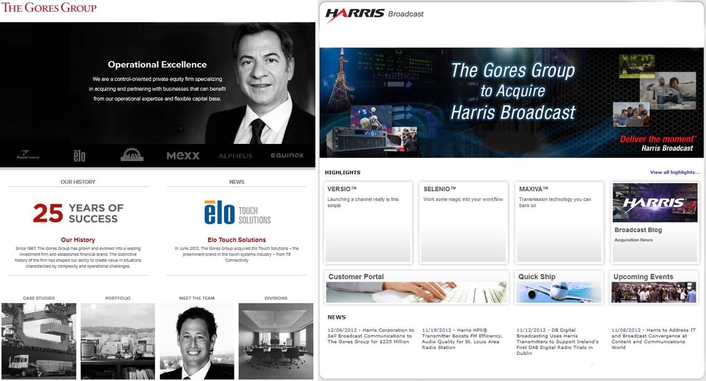 Harris Corporation to Sell Broadcast Communications to The Gores Group for $225 Million
Harris Corporation (NYSE:HRS) has reached an agreement to sell Broadcast Communications to an affiliate of The Gores Group, LLC for $225 million. The price includes $160 million in cash at closing, a $15 million subordinated promissory note and an earnout of up to $50 million based on future performance.

The transaction is subject to customary regulatory review and closing conditions and is expected to be completed in early calendar year 2013. On May 1, 2012, Harris announced plans to divest Broadcast Communications.

"The sale of Broadcast Communications reflects our strategy to optimize our business portfolio and focus on our core businesses," said William M. Brown, president and chief executive officer of Harris. "As previously communicated, we plan to repurchase up to $200 million of our shares after the deal closes. This is in addition to the $200 million of share repurchases already planned for fiscal 2013 and reflects our ongoing commitment to effectively deploy capital, including returning cash to shareholders."

"In Harris Broadcast Communications, we are investing in a proven technology leader with great products and a great team. We are excited to provide the capital and support to transition this division to a strong and independent company further enabling it to continue developing and delivering market leading technologies to its customers," said Ryan Wald, Managing Director of The Gores Group.

About The Gores Group
The Gores Group, LLC is a global investment firm focused on acquiring controlling interests in mature and growing businesses which can benefit from the firm's operating experience and flexible capital base. The firm combines the operational expertise and detailed due diligence capabilities of a strategic buyer with the seasoned M&A team of a traditional financial buyer. The Gores Group, which was founded in 1987 by Alec E. Gores, has become a leading investor having demonstrated over time a reliable track record of creating substantial value in its portfolio companies alongside management. Headquartered in Los Angeles, The Gores Group maintains offices in Boulder, CO, and London.

About Harris Corporation
Harris is an international communications and information technology company serving government and commercial markets in more than 125 countries. Headquartered in Melbourne, Florida, the company has approximately $5.5 billion of annual revenue and about 15,000 employees — including 6,000 engineers and scientists. Harris is dedicated to developing best-in-class assured communications® products, systems, and services.