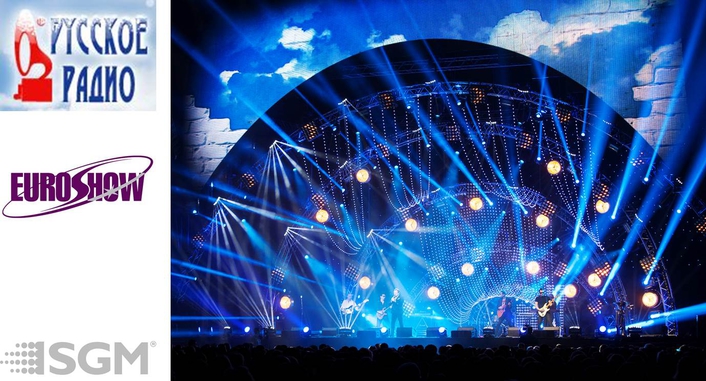 .
Established by Russian Radio in 1996, the Golden Gramophone Award is the most prestigious music award show in the country. Recently celebrating its 15th annual event at the Ice Palace in St. Petersburg, rental company (and technical partner) Euroshow played the leading role, developing a design conceived by the company’s Alena Morozova.

Incorporated in the set were no fewer than 480 strings of SGM’s pixel product, the LB-100 LED balls. Each string contains seven semi-transparent balls with a sphere of 28mm and a pixel pitch of 120mm viewable in 360˚, creating alluring 3D graphic displays.

Demonstrating the magnitude of this show, the award itself is a golden gramophone statue, comprising gold and silver mounted onto a platform of optical glass with laser engravings. Experts estimate the cost of a “gramophone” to be around 1.4 thousand US dollars. On top of this, the Golden Gramophone ceremony usually utilises 36-40 tons of decorations, 500 lighting fixtures and dozens of LED screens covering 320 sq. m. — and thus it is the biggest social event for celebrities in Russia.

The 7,000 people who attended this year’s Golden Gramophone were able to appreciate the lighting design of Dmitrii Shmelikov and Aleksej Evstifeev operating the SGM LB-100 via a grandMA full-size desk.

“The SGM LB-100 LED balls were chosen as the only equipment on the market that would allow such an elegant and airy decoration. The flexibility of the system and the possibilities of its programming and management provide a wide scope of creativity,” says Alexandr Blednykh, director of Euroshow.

Rental company Euroshow sees the clear advantages in deploying LED solutions for its installations. States Alexandr Blednykh: “LED is modern, colourful, compact and cost-effective!” Therefore, the LB-100 has quickly proven to be a favourite product in his stock. “On all projects where we use the LB-100, expectations are met and we are extremely satisfied.” He adds that the ease and the usability of the pixel product as well as its originality are key factors in selecting it for shows and events.

A close cooperation between SGM and Euroshow is of key mutual benefit and Alexandr Blednykh appreciates the responsiveness of SGM’s local area manager Constanta Gorgan Rasmussen for any questions and support issues. Ms. Rasmussen comments: “We are happy to see so much activity on the Russian market. SGM is an intelligent light suitable for a wide range of applications. Many thanks to Euroshow for their professional cooperation and for exploring SGM’s LED effects lighting.”

Euroshow is now steadily reaping positive feedback from enthusiastic artists, musicians, organisers and viewers. “Even staff members from the Ice Palace were discussing from the sidelines this unusual and beautiful scenic decoration,” Alexandr Blednykh says in conclusion.