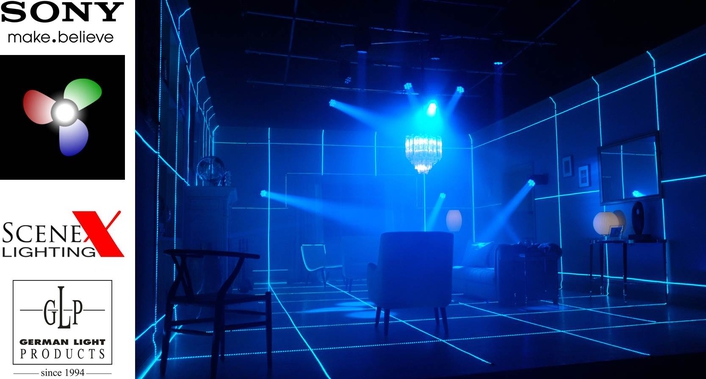 Distributed in the States by GLP US, the Scenex Lighting solution was adopted by production designer Tim LaValley of Battlecruiser Inc., who as concert lighting consultant was tasked with developing a ‘concert lighting’ feel for the commercial — to promote Sony’s new Bluetooth Wireless Speaker.

Having used GLP’s Scenex LED successfully on tour he requisitioned a large amount of the LED tape to be embedded into the walls, the floor and other items on the set. Hooked up via DMX to create a large ‘grid’ it was brought to life progressively, a section at a time, as the transformation developed.

Explaining Battlecruiser’s involvement in the project, Tim LaValley said, “The producer of the commercial, James Graves, has been a good friend for many years and we have worked together on several projects; he thought that this would be a great fit.”

“As to the concept, Asif Mian, the director, had a very clear idea of what he wanted, and he communicated that very clearly to the art department and myself.”

The art department, consisting of production designer Greg Lang and art director Morgan Runyon, built the set at Delfino Stages in Sylmar, California. “The objective was to create a realistic home interior whose walls we could fly out for camera movement,” states LaValley.

“As soon as James and Asif contacted me, I immediately knew what products I wanted to use. Since I work principally in live music events, such as tours and concerts, I naturally turned to the vendors I like to use on those projects, including Mark Ravenhill. I’d worked with Mark on the Steve Aoki tour that I designed, and I knew I wanted the LED tape that we used on that project — so he was my first call.”

The Scenex-edged ‘grid’ was hooked up to DMX and Tim LaValley praised programmer Carl Wake for his masterful job in building each row and column as its own section. “This enabled Tom Huston, our LD from DPS, to light up the room in every way imaginable.” 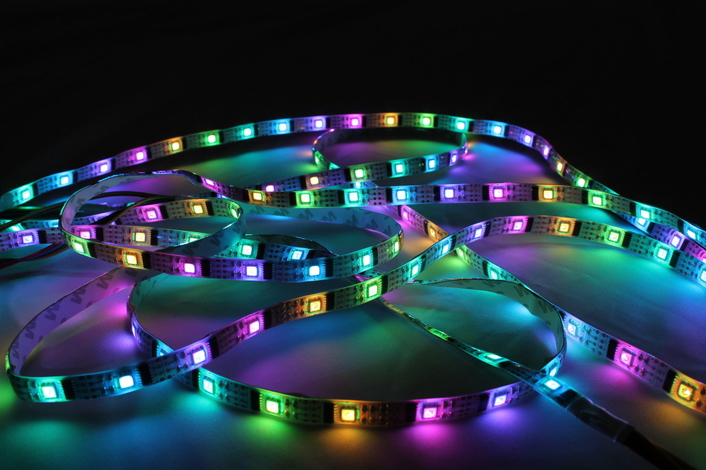 The underlying story-line is that a man comes home and sends music from his phone to his Sony Bluetooth Speakers. The music promptly transforms his ordinary house into a concert venue, complete with a Tron-like grid, disco wall, overhead lighting and underfloor panels.

Complementing the Scenex LED grid were the new impression X4S fixtures, which were distributed around the room — some at ground level, some head height, and some in the truss — to augment the concert lighting feel. A final X4S was placed in the fireplace to provide a backlight for that feature.

The commercial started airing on December 2nd, and Tim LaValley says that the simulation is proving a resounding success. “Everyone, from client, to agency, to production company, director and crew, are extremely happy — and I’m also very pleased with the results.”