.
TV Lighting director, Kathleen Dobbins, has been involved with the popular NBC talk show Late Night with Seth Meyers since its launch in February 2014, working alongside lighting designer, Rick McGuinness and show producer Mike Shoemaker. And although the sets remain largely the same, in September she started to adopt GLP’s compact impression X4 S LED fixture for the subtle nuances that were required from show to show.

She explains, “I was looking for a fixture with a very small footprint, but which was still sufficiently versatile to add to my rig for guest bands. I also wanted to use the flexibility of the fixture as eye candy on the deck during a musical segment or to light a wall in a comedy sketch.”

She had mentioned this to Drew DeCorleto [Director of Lighting Production at New York rental / production company WorldStage Inc], and he arranged a demo of one of their newly acquired GLP impression X4 S. DeCorleto sensed that with its 7 x RGBW 15W LEDs and 7°-50° zoom optic it would also meet the LD’s other needs. “It’s our job to make sure WorldStage stocks products that the market requires,” he says. “Often LD’s come to us looking for a light with grand requirements and it’s our job to research the best solution for them within their budget requirements.

“We were looking for a direct replacement for another fixture, and once we knew we were going to buy the X4 S, we brought it to the LD’s to look at and see if this was a product they wanted on their show. In most cases I know the LDs’ likes, needs and budgets.”

In this instance, both parties agreed that the X4 S performs flawlessly under the requirements of filming a top talk show in high definition. 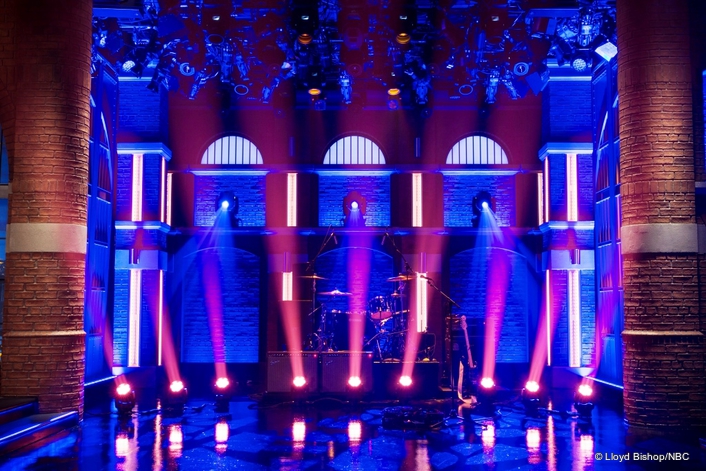 In fact WorldStage had supplied Late Night with a great percentage of Kathleen Dobbins’ lighting rig. “They are always willing to go the extra mile to make sure we have what we need to make the show happen,” says the LD, “and that is no easy feat in the fast paced environment of late night television!”

She notes that the guest band area is very small and fills up quickly with the bands and their equipment. “I still wanted the ability to have fixtures on the floor for a more dynamic look, so finding a compact fixture with enough punch and features to help me create a new look for every band was my priority. The impression X4 S does just that; with its small fixture size and fantastic zoom it has provided exactly the versatility I was looking for.”

The set itself consists of large warm brick walls with accented green girders and half circle shaped windows throughout. It has two entrances upstage through large sliding windows on left and right of an open proscenium.

Upstage of the proscenium is used for the guest bands and comedy sketches, and this is where the impression X4 S comes into play.

The resident 8G Band is a reference to Studio 8G — the location used, which has previously hosted Jeopardy, The Phil Donahue Show, and The Rosie O’Donnell Show. While the Late Night set is permanent, popular shows like Saturday Night Live (for which LD Phil Hymes also features GLP X4 S impressions), will build smaller sets on the show’s ‘off’ days. In fact, coincidentally the X4 S had made its first appearance on SNL the same week as Late Night — for which Phil Hymes also acts as lighting consultant.

Kathleen Dobbins, herself, can reflect on an impressive show resumé, having been a lighting director for CBS Superbowl Park in New Orleans, The Nate Berkus Show, as well as Associate Designer for CBS This Morning, Inside NASCAR, CBS Sports, Speed Center, and the Golf Channel Studio at the Masters Golf Tournament — as well as having worked on the design teams for various Tony award winning Broadway shows.

Back at Studio 8G, she says that the use of low energy sources like the impression X4 S is helping to offset NBC’s vast inventory of power hungry tungsten discharge fixtures and will welcome the day when she is able to achieve a fully ‘green’ lighting rig.

In conclusion, Dobbins says the X4 series represents the ideal combination of a bright, highly zoomable LED moving light with a compact footprint which can be placed almost anywhere in a studio where space is in high demand. Drew DeCorleto readily agrees. “The zoom, size and pixel control are the selling points of the X4 S for us,” to which Kathleen Dobbins adds, “We are thrilled to have found a product that fits the bill as well as the X4 S does.”