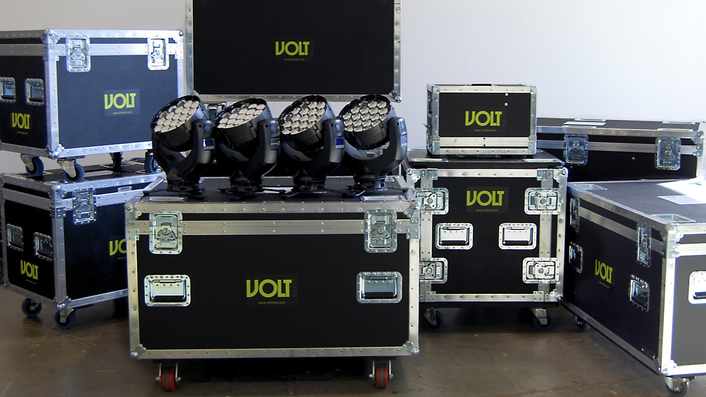 .
Back in May 2010, Californian based lighting designer Matthew Shimamoto set up his rental company Volt Lites, with a view to addressing a number of different market sectors. Based north of Los Angeles, he quickly established the company in the international touring and corporate worlds, having subsequently worked on live TV shows, music videos and numerous special events.

As a designer, he had often used fixtures from GLP’s LED impression range — but it was with the launch of the new impression X4 LED moving head that he took the decision to invest in a product which combines power, flexibility and practicality in a unique design.

Incorporating 19 powerful quad color RGBW LED's, each rated at 15W, the impression X4 offers a single homogenized color output from its front lens across a wide spectrum — from deep saturates through to soft pastel shades — by incorporating more of the white LED element.

Volt Lites were quick to adopt the new head as Matthew Shimamoto confirmed. “Once [GLP president] Mark Ravenhill informed us that there was a new impression available we immediately drove to GLP to evaluate and experiment with this fixture. We were so impressed with the performance that we decided to incorporate the X4’s into our future designs.”

Prior to purchasing, they decided to trial some of the fixtures on a new TV show that is set to air this month. “We already knew the X4 looked great to the human eye, but we needed to see how they looked under the scrutinizing eye of the camera — and they performed exceptionally well,” he confirmed.

The impression range has always been a firm favorite of the designer, due to its size, output and overall sleek design. “We love the fact that the X4 is the same size and shape as the Impression 120 RZ.  The bug-eyed lenses and homogenized beam are crucial elements of its success.  Adding the white channel and a fantastic zoom range helped make the decision to purchase these fixtures that much easier,” Matthew continued. In fact some of the units were deployed the first day that Volt Lites took ownership.

However, there were other positive factors that the company was quick to pinpoint. “Weight is always a consideration in the design process, and the eco-friendliness of the X4 also allows us to put these fixtures in environments where power can be an issue.  Our clients have expressed the desire to have a big impact type of fixture without the headache of sourcing out massive amounts of power.”

Summarizing the benefits of the impressions X4, the Volt Lites director points to the homogenized beam and uniform lens color as being the clear winners. “This makes the X4 a true wash light — and the wide range of beam sizes available from the zoom simply reinforces its role as a usable wash source.  The introduction of the white LED allows us to use the fixture in a more TV friendly environment and the light weight and small footprint of the X4 enables the fixture to be placed in a variety of positions.

“Finally, by utilizing the graphical arrangement in the lens the designer can come up with unique and distinct looks which give the X4 even greater potential.”

Although this is their first purchase with GLP, the long-standing relationship Matthew Shimamoto has enjoyed with the manufacturer gives him all the confidence he needs. “GLP’s professionalism, care, attention to detail and overall excellent support reinforces the wisdom of our decision at Volt to purchase the Impression.”

And Mark Ravenhill adds the comment, “We are experiencing tremendous popularity with the impression X4 and Matthew and his team are just one of a number of rental and production companies who are latching onto its advantages.”