Glensound Activities at the BBC and Beyond 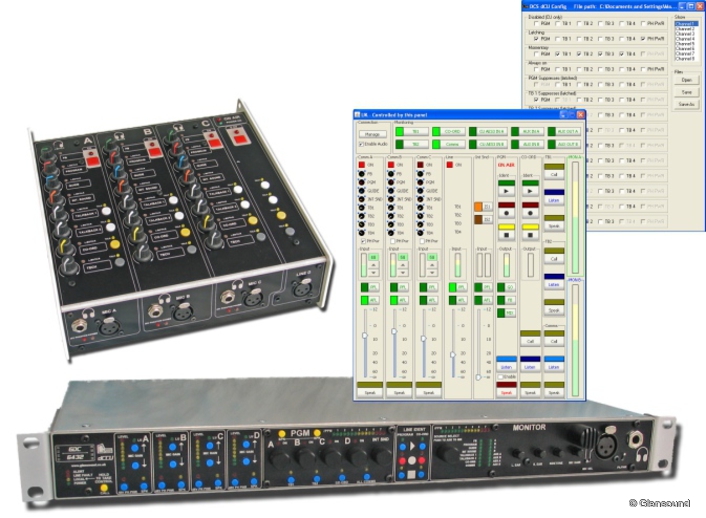 The unique feature of the units is in Glensound’s development of an Automatic Gain Adjust (AGA) system. This is a very sophisticated gain adjust that takes a snapshot of the audio levels over a 7 second sample period. The user simply presses the ‘Take Level / Mic Gain’ button and reads a sample passage for level. The AGA system is able to set the input gain level over this period whilst allowing a suitable headroom for any louder passages. This has the benefit over traditional AGC systems that the level is constant and does not increase background noise during quiet passages for example.

The second key function of the Voiceover units is monitoring. There is an audio input that is only fed into the users headphones, allowing them to monitor context audio for their voiceover.

Marc Wilson, Glensound’s Sales & Marketing Manager, can see wide appeal for the new units, 'There are many mic pre-amps available, but our intention was to develop one that delivered a constant high quality audio signal to the recording or play out device, that could be used by anyone at a facility with no more than 30 seconds of instruction. As the monitoring is included, the Voiceover units can be used independently of a mixer, and just connect to a recording device or PCs audio connections.'

Marc Wilson, Glensound’s Sales & Marketing Manager, can see wide appeal for the new units, 'There are many mic pre-amps available, but our intention was to develop one that delivered a constant high quality audio signal to the recording or play out device, that could be used by anyone at a facility with no more than 30 seconds of instruction. As the monitoring is included, the Voiceover units can be used independently of a mixer, and just connect to a recording device or PCs audio connections.'

The Voiceover 08+ is a 1u 19inch unit that adds an important extra function on top of LED PPM meters. It has a front panel ‘play/record’ switch with rear panel loops. This is used to trigger the external automation control or recording device into play or record mode. It also changes the mix in the users headphones.

At BBC Northern Ireland, the Voiceover 08+ is being used by reporters to record voiceovers into their Synergy video editing system.

NAB 2010 Launch. Glensound Return To Their Routes With A Very Fine Digital Hybrid

Glensound Electronics are launching a very high quality digital hybrid for the plain old telephone system at this years NAB in Las Vegas.

Glensound have returned to hybrid design with the Copper 29, part of the Atomic Range of products. The brief was to develop the best possible hybrid, with the cleanest audio, the lowest noise, the maximum worldwide compatibility, and the most flexible control.

The best audio quality was achieved using a 2 pass, twin DSP process, giving a dedicated device to the important function of echo cancellation, with mix minus generation. The second DSP takes care of the further processes of the compressor/limiter, automatic gain control (AGC), band pass filters, and auto ducking. The result is an audio signal with better than -80dB of separation.

A CPLD device is utilized to manage sample rate conversion to remove any unwanted delay, and a voice optimized DAA ensures compatibility with worldwide impedance matching. The very useful function of auto answer is included as a selectable option, and the inputs and outputs are available as balanced analogue or AES3.

The lead designer on the Copper 29 was Ian Burns, 'Making a telephone balancing unit is fairly simple, as shown by the number of simple passive units available. Developing a hybrid with the best possible performance figures in each area was a real challenge however, and we spent a long time on developing methods to ensure we achieved better than -80dB separation, in a worldwide compatible, and universally controllable system.' 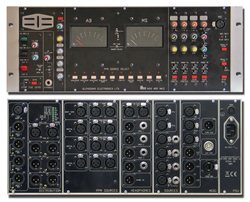 In 1993 Glensound developed a master output unit called the GS-OM5. It was very popular with the BBC, particularly for radio outside broadcasts, and it was referred to by the affectionate name of the Mini Mop. This unit is still used regularly by BBC radio OBs over 15 years after their first units arrived. During the last 12 months, BBC Radio OBs has been working closely with Glensound to specify the requirements for the MkII version. Glensound have adopted the BBCs affectionate name and called the new unit the MiniMOP V2.

This is an extensive feature list that created some serious challenges in the system development, 'If you look at the rear panel of the MiniMOP V2 you will get an idea of how comprehensive a unit it is. To get all of these functions into a portable desktop unit was a real challenge it terms of the space available on the circuit boards and panels, whilst at the same time ensuring a high signal quality and maintaining a long potential life span, as is expected in our products.' comments Glensound’s lead analogue systems designer Chris Hill.

The MiniMOP V2 will be entering service for BBC radio outside broadcasts, and at BBC Coventry & Warwickshire this April. It is available now at a list price of £3405.00 excluding VAT.

Glensound Electronics have released a portable device that provides electronic logging to users headphone listening levels. The GS-HL005 has been developed over the last 2 years whilst working closely with the BBC hire department DV Solutions.

DV solutions were looking for a device for camera operators that not only provided verifiable logging information, but allowed the operators to listen to short term increases in level without limiting, and without affecting the audio quality.

Since the new Control Of Noise At Work Regulations were introduced in 2005, there has not been a satisfactory way to comply with them with regard to using headphones. The regulations are based on a ‘dosage’ period over 24 hours. This could be 80dB (A) over 8 hours, or 103 dB (A) over 2 ½ minutes, with an exponential variance in between. The reality of many broadcasters is that they do not listen at high levels for long periods, but may have certain times when they do listen at higher levels. With traditional ‘limiter’ options, all increased levels were immediately limited and had a sacrifice in audio quality.

The lithium ion battery or USB powered GS-HL005 does not affect the audio quality at all. It receives the output from the headphone amplifier and simply monitors the levels that are output to the headphones. The user receives spoken instructions and warnings via the headphones so knows at all times if they are listening at levels that will get them to the end of their work day or not, allowing them to adjust levels accordingly. If the dosage level is reached, the user has the option to override the system (after receiving a suitable warning) so they could continue listening.

All data on exposure levels is recorded, along with any override of warnings. When the GS-HL005 is next connected to a PC, the log information is uploaded and a record is kept. This allows the organization to have a simple record of an individuals exposure and a record if they chose to override any warnings or limits. As the user receives warnings in their headphones, they will become accustomed as to what is their ‘norm’ level and the tendency to keep increasing levels will reduce.

The unit is supplied with administration software allowing viewing / saving of logs, and the ability to select the type of headphones being used. There is also user software that provides a real time graph and update of exposure levels.

Chief Designer at Glensound Electronics is Paul Grant, 'The GS-HL005 could potentially end up in a court room, providing evidence of audio exposure. Therefore we have had to be very careful with the algorithm and DSP development to create a very sophisticated measurement device that satisfies the needs of an organization, whilst at the same time educating the users as to the levels they should be listening at.'