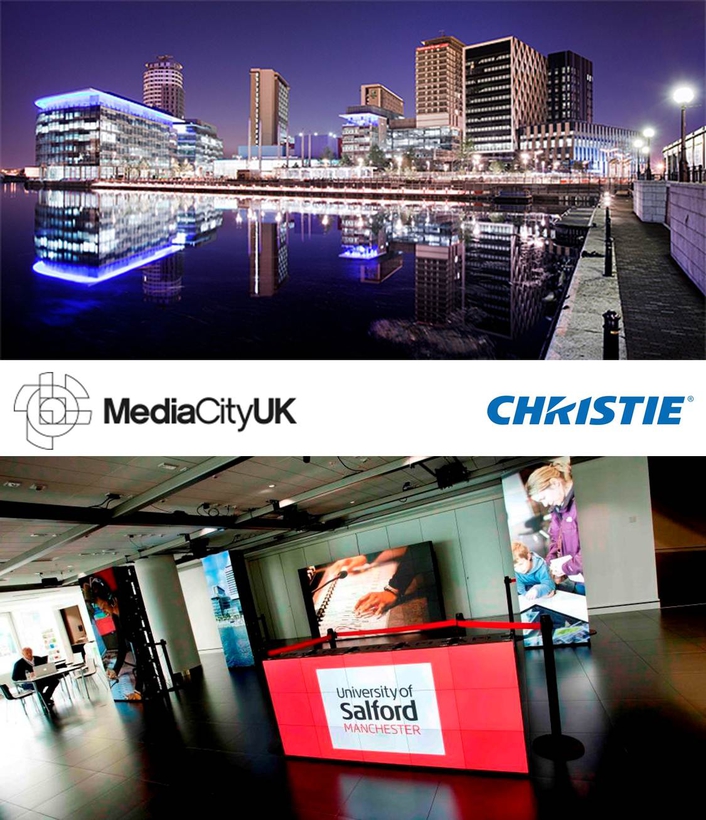 The entrance area of the new building itself is known as ‘The Egg’
The University of Salford’s unique digital learning, teaching and research space opened in October at MediaCityUK — the major development in Salford Quays which is also home to the BBC and independent creative, digital and media organisations.

The public area on the ground floor is dominated by a digital interactive showcase that includes a formal presentation space and ten interactive touch tables — designed to engage with the visitors. The central feature is a high resolution display wall made up from 120 Christie MicroTiles, able to display images of 9600 × 3840 resolution. Electrosonic was the systems integrator for the project.

The building is home to 1500 students and staff, offering both undergraduate and postgraduate courses in all aspects of radio, TV, computer games, and digital media production, as well as providing research facilities.

The entrance area of the new building itself is known as ‘The Egg’, and is described as “a publicly accessible digital interactive showcase for visitors and students”. It has been designed as a flexible space where resources can be deployed in different ways — for instance it can be used for research — or to display research by other facilities — with cameras and PC’s installed for motion tracking.

The MicroTiles wall has initially been installed as a 15 x 8 array; however in future the Tiles may be redeployed to achieve project-specific layouts (such as 12 x 10 or 20 x 6).

Taking video wall display technology to a new level, Christie MicroTiles are built on proven DLP® technology and are specifically designed for maximum image quality in demanding indoor, high ambient light environments such as this. The Christie solution was adopted by the University following Electrosonic’s recommendation. It was a pre-condition that the wall display should be free-standing on the raised floor and not require any structural fixings to the building. This necessitated the design and construction of a suitable support frame, and Electrosonic enlisted the services of Long & Co of Dartford to handle the structural engineering. Additional framework was supplied for use when the wall is broken down into smaller blocks.

The display is fed from a number of DVI computer sources. Two 7thSense Delta Media Servers, each fitted with 4-head graphics cards, output an overall resolution of 8000 x 3200 (in native 8K video format). There is an additional NVIDIA Quadro 7000 connected to a workstation with an output of 4000 x 1600, while all other PC/Mac sources are 1920 x 1080. In addition, there are SDI tie lines to the TV studios in the building while all DVI sources and the DVI inputs from two Christie Spyder X20 1608 video processors are connected to a Lightware Matrix.

The Spyders operate in master/slave configuration — one managing the top half of the screen while the other handles the bottom. All outputs are used with the Lightware Fibre Optic extenders to the 16 ECU’s.

The video wall itself and the whole space around it is intended to be used for future student and research projects. Equipment for this purpose includes three projectors aimed at the floor and six machine vision cameras — this combination is intended to allow the development of projects based on gesture and image recognition.

Within the main space there are also ten interactive touch tables for use by students and the general public. Here Electrosonic was required to deliver working systems complete with initial content. The interactive software was produced under sub-contract by Stardotstar, a Manchester-based content producer who can provide ongoing local support.

The initial design envisaged 32 inch panels with capacitive sensors, but in developing the design the decision was taken to move to 40 inch panels with multi-touch infra-red sensors from PQ Labs. The touch tables are driven by Mac Mini computers that are centrally rack mounted in the control room. Extron USB over CAT5 extenders are used.

Behind the videowall is the enclosed Presentation Area which can be used for formal presentations, both informal and formal meetings and for research projects. The room layout can be changed, but there is a large front projection screen that is permanently installed, served by a Christie DHD800 projector, recommended as being the most appropriate projector to meet the client’s requirements.

This can be sourced from any compatible source device in the control room, or from a presenter’s computer.

Electrosonic also designed and provided full and flexible audio control and sound reinforcement in both the Egg and Presentation spaces. The initial configuration is as a 5:1 and 2:1 system – however, the equipment can be re-located or augmented for different projects. 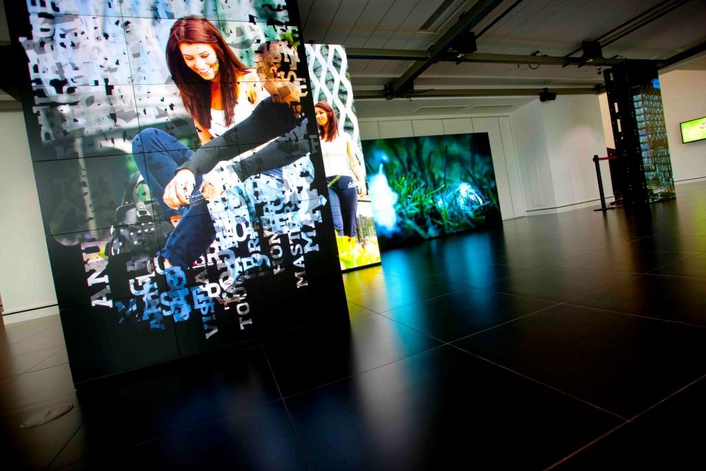 The overall system is unusual in that it is at the same time an experimental facility and a showcase, and the University will be exploring how best to manage it in a way that achieves both objectives. As for the MicroTiles wall itself, this is visible to all, including the public walking past the building.

The University has a team of technicians for daily running and content management, with most of the content production taking place in house. And with two permanent content creators employed, in the coming months the MicroTiles display can be expected to demonstrate its full potential.