Getting to the Heart of London2012 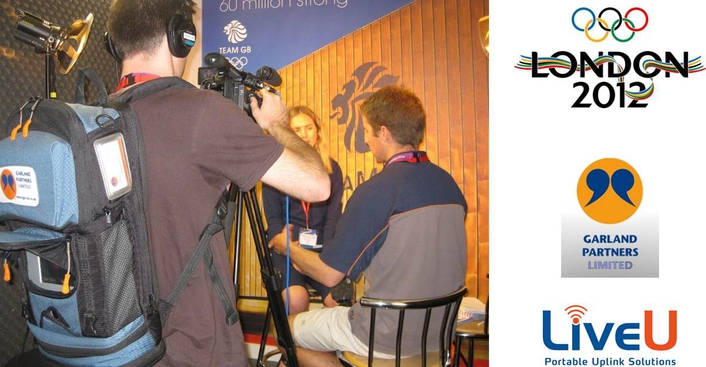 Many of the world’s media are using a device carried in a backpack to ensure their viewers see all the emotions and details
When London 2012 ends, the International Olympic Committee expects that almost five billion people in more than 200 countries will have watched the Olympic Games. So, with more than 13,000 accredited broadcast personnel anticipated to exceed 61,000 hours of broadcast time, finding a competitive broadcasting advantage is essential for members of global online and traditional media outlets. Many have found the answer in a backpack from UK-provider, Garland Partners Limited.

The team at Garland Partners has supplied 46 global media outlets with more than 100 LiveU units. The units — that can be carried around in a backpack — allow reporters in the field to send video by cellular signals back to their studio so that they can be transmitted out live to viewers. Media outlets no longer need satellite trucks stationed near their camera operators. Instead, they are free to follow the crowds and events as they happen and where they happen.

The units have given both traditional broadcasters and online media a chance to provide their viewers with more intimate and varied coverage of both the highs and lows of the Games. So far, the media has used the LiveU units to obtain exclusive interviews, provide crowd reactions, and send live coverage from famous London sites such as Tower Bridge and Buckingham Palace.

Camera operators with their LiveU backpacks secure on their backs have been able to send live signals as they cycled along the path next to rowers at Eton Dorney, followed marathon and triathlon runners through Hyde Park and the streets of London, interviewed tennis players at Wimbledon, charted the progress of sailing in Weymouth and Portland, monitored the equestrian events at Greenwich, and caught the excitement around the Olympic park in Stratford

Sports journalist Michael Buehler with Swiss TV says the unit has worked brilliantly for them. Having a device at the ready even allowed Swiss TV to get an exclusive interview with Roger Federer as he walked off the practice court ahead of the tennis final with Andy Murray. “We have been everywhere with the unit,” Buehler said.

New Zealand’s SKY TV had been planning for two years to use LiveU for their Olympic coverage. The technology was used to film from Kiwi House in London where SKY used wired Internet to give them a cheap fixed-video link that provided great live-to-air transmissions They have also used the units to send both live and stored programming into their ‘Prime News’ show and a sports magazine show called ‘The Crowd Goes Wild.’. “We have found it great to be able to stand in front of well-known London sites and venues, such as Big Ben, to get the atmosphere of the Games,” stated SKY TV’s Technical Production Manager, Kerry Phelvin.

Garland Partners has been working alongside US-based LiveU to ensure clients are able to provide superior coverage of events as they happen.

Lorna Garrett, Director of Garland Partners, is pleased her company has been a part of the London2012 Olympic Games and able to assist the world media.

“As the exclusive UK distributor for LiveU, we have been able to offer a remarkable 3G mobile uplink product,” said Lorna. “The response from news crews on the ground has been so positive. They have been able to film events as they happen, where they happen, and then instantly send the stories back to their studios anywhere in the world. It’s thrilling to know we are part of capturing the fabulous spirit and heart of the Games.”

About Garland Partners Limited
Garland Partners Limited (GPL) is an established UK company working with leading suppliers of digital video streaming and IPTV solutions to deliver professional end-to-end systems for many applications including internet TV, mobile TV, IPTV, and broadcast services. The company focuses on meeting customers’ system requirements, providing a full package of technical and commercial support with the best available products. Customers range in size and application, and GPL’s strength is its flexibility in matching the right technology to client needs.

About LiveU
LiveU is the pioneer of broadcast-quality, video-over-cellular solutions that allow live video transmission (HD and SD) from any location around the world.  LiveU’s backpack/handheld solutions include multiple 4G LTE/3G, HSPA+, WiMAX and Wi-Fi cellular links, which are optimised for maximum video quality based on the available network conditions. With top-tier customers in 60+ countries across five continents, LiveU’s solutions have been used at high-profile events, including the 2012 US Presidential Campaign, 2011 British Royal Wedding, Academy Awards®, GRAMMY Awards®, Super Bowl, NBA All Star Weekend, Brazilian Carnival, World Cup in South Africa and 2008 Beijing Olympic Games.