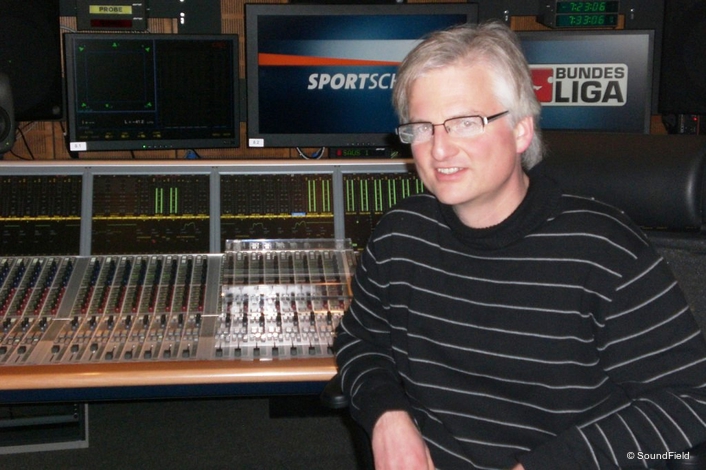 WDR Sound Engineer Markus Bozzetti
For decades, German sport on television has been associated with one programme above all others: 'Sportschau', the weekend sports roundup produced by West German Broadcasting (Westdeutsche Rundfunk, or WDR) and broadcast on the main German public-service terrestrial channel ARD. As the Winter Olympics opened in Vancouver and German public-service TV channels began their long-planned transition to high-definition broadcasting, the much-loved Sportschau moved to a new timeslot on Saturday nights, and, from February 13th 2010, began transmission in high-definition with 5.1 Dolby Digital surround sound.

WDR needed to ensure that the whole of Sportschau could be broadcast with a 5.1 surround soundtrack every week, even when older or archive material with a stereo soundtrack was due to be included — a considerable technical challenge. Many viewers find it jarring when a stereo segment is broadcast in the midst of a modern high-definition transmission which otherwise features a full 5.1 soundtrack: the stereo parts seem extremely 'flat' by comparison. After a intense period of testing various ways of upmixing stereo to surround, WDR turned to UK manufacturer SoundField and acquired one of its UPM-1 Stereo-to-5.1 processors to handle the job.

Markus Bozzetti is the sound engineer at WDR who was responsible for creating a workable 5.1 audio broadcast workflow for Sportschau in high definition. He became aware of SoundField's Upmix Processor while searching for a suitable production-friendly solution — the UPM-1 had already proved itself on live broadcasts from a number of international broadcasters who had faced the same problem as WDR. After a detailed period of testing under working conditions last Autumn, Bozzetti established that the UPM-1 fulfilled all of WDR's requirements regarding live use and usability, as well as the quality of its upmixed, processed surround sound and the phase-coherence of the stereo downmixes that can be back-formed from that surround.

Asked which UPM-1 features proved decisive in WDR's decision to adopt SoundField's upmix processor, Bozzeti is unequivocal. "The UPM-1 is just such a handy sound design tool for mixing stereo material into a multi-channel, surround environment," he explains. "It was also particularly important to us that stereo-derived upmixed multi-channel material created in the UPM-1 would downmix well if necessary, without phase problems.

Sportschau began live HD transmissions with 5.1 sound at 6pm on February 13th, on the first national German TV channel. The UPM-1 will be in use every week preparing 5.1 content for the Saturday night show from now on.

SoundField's UPM-1 is an easy-to-use hardware Stereo-to-5.1 upmix processor, designed with particular emphasis on use in live broadcast environments. A convincing 5.1 soundscape may be created from almost any stereo output material, yet the surround-sound results preserve the stereo imaging of the original, and remain completely downmix-compatible at all times.