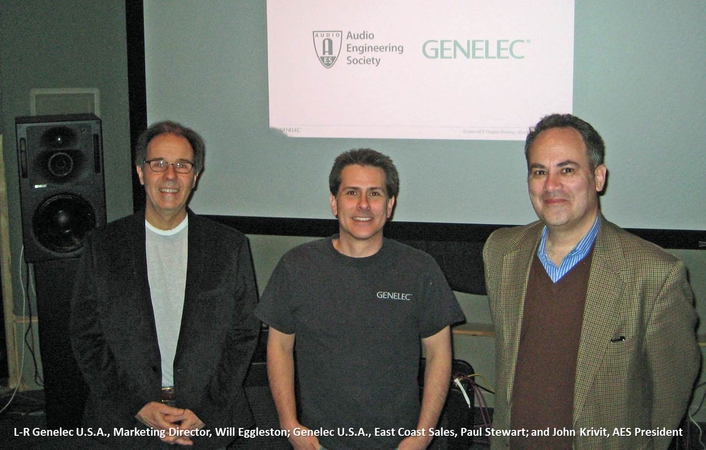 Genelec, the leader in active monitoring technology for over 35 years, recently hosted the Boston Section meeting of the Audio Engineering Society at its U.S.A. headquarters in Natick, MA, on Tuesday, March 8, 2016. The meeting featured a presentation titled “3D Audio – An Intro, From the Bottom Up” to a standing-room-only crowd, which included AES President John Krivit and President Elect Alex Case, among other AES members, students, and Boston-area engineers and producers.

3D Audio has become one of the most widely popular topics among audio engineers and industry professionals in recent years, and this latest AES event to delve into the topic was led by Genelec U.S.A. Marketing Director Will Eggleston, who discussed the changes and challenges in the delivery of multichannel audio and the future of 3D audio. The evening’s demonstrations featured a Dolby Atmos® 7.1.4 monitoring setup including multiple Genelec subwoofers, Genelec Smart Active Monitoring™ (SAM™) 1237A 3-ways for Left and Right channels, a single SAM 1238CF 3-way for the center channel, with Genelec 8240s for sides and rears, and 8330s for the overheads. Monitor control was handled by Genelec’s Loudspeaker Manager™ (GLM™) software, giving easy access to individual monitor channels during playback for the capacity crowd.

“The interest to learn about and to actually experience an Atmos system was made clear at tonight’s Boston AES Section event,” stated AES President John Krivit. “We had an overflow crowd which included long time experts as well as professors from several local colleges who brought their students. Audio system designers, installers and even an Academy Award-winning film sound mixer came to learn. There’s obviously a huge demand for knowledge about new immersive playback formats like Atmos.  Everyone in the audio world wants in on it and nobody wants to be left behind. Genelec has been a long time supporter of our conventions, conferences and our AES student events and this generous outreach to the local Boston audio community was very well received.”