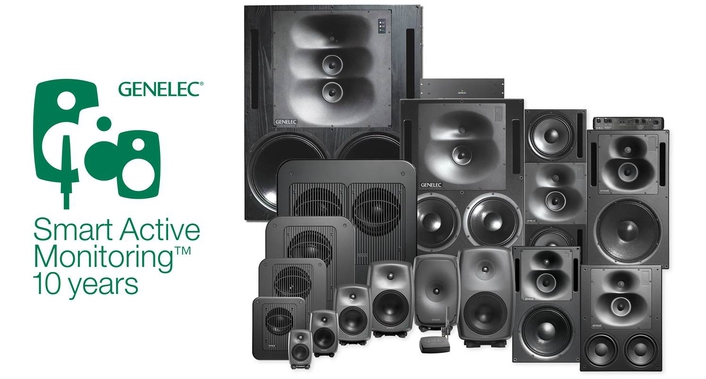 Genelec, the leader in active monitoring technology for over 35 years, is celebrating 10 years of its Smart Active Monitor™ (SAM™) concept. Models in the SAM range are capable of automatically adapting to acoustical environments to offer an indispensable tool for sound professionals in broadcasting, post-production, music studios and more. SAM systems are controlled with digital networking, enabling users to build highly flexible systems of audio monitors from two-channel stereo to immersive 3D audio. In 2006 the SAM line of active DSP monitors initially included the TEC Award winning 8240 and 8250 bi-amplified models and 7260, 7270, and 2717 subwoofers, and has since been expanded to include latest generation 8300 and IP 8430 models, the 1236 Main Monitor SAM system, the recently introduced 8340 and 8350 Smart Monitors and 7360 and 7370 Smart Subwoofers.

The acoustical features of SAMs can be optimized with automatic calibration for different working styles or client demands. Such adaptations include aligning levels at the listening position, adjusting delays from the loudspeakers to the listening location, and compensating for the acoustical room influences in the frequency responses (equalization). One of these proprietary tools is AutoCal™, Genelec´s acoustic calibration solution that is supplied alongside the Genelec Loudspeaker Management software package, GLM. SAM effectively reflects the most advanced monitoring system features available in the audio industry. The capabilities of SAMs are also future-proof and can be increased later with software upgrades both in the monitoring speakers themselves and in the system management software.

Using GLM software and AutoCal™, a monitor can be turned into the reference it needs to be in today’s demanding environment for engineers. This improves performance and not only helps the user to achieve a flat frequency response at the listening position but also handles phase alignment in between monitors and subwoofer, as well as time of flight and level compensation.

In addition to the traditional building blocks of an active monitoring speaker, SAMs contain the following features:
1.    Digital signal processing of the audio signal instead of traditional analog filtering, making SAMs very flexible and precise.

4.    Sophisticated automatic system calibration algorithm, enabling SAMs to adapt to their acoustic environments and to be integrated as a full audio monitoring system.

5.    Graphical User Interface, enabling users to interact with all components of the monitoring system and to customize the system to best fit to the environments and applications.

Will Eggleston, Genelec Inc. Marketing Director, stated, “SAM bundles all the benefits of Genelec’s advanced monitoring systems to a single, easily understandable and descriptive term. The rise of digital technology and evolving market expectations about the possibilities of audio monitors put Genelec in a position to roll out what became our SAM concept 10 years ago. Designers of systems have shown that digital monitors have some notable capabilities beyond the analog realm, and SAM embodies the shift from the analog to the digital world, looking at increasing sound quality and the listening experience of the user while allowing the integration of monitors and subs into a correctly aligned reproduction system.”

Genelec, the pioneer in Active Monitoring technology, is celebrating over 35 years of designing and manufacturing active loudspeakers for true and accurate sound reproduction. Genelec is credited with promoting the concept of active transducer technology, which many manufacturers are just now incorporating into their products. Since its inception in 1978, Genelec has concentrated its efforts and resources into creating active monitors with unparalleled sonic integrity. The result is an active speaker system that has earned global acclaim for its accurate imaging, extremely high acoustic output from small enclosures, true high-fidelity with low distortion, and deep, rich bass. In 2016, Genelec marks the 10th anniversary of its Smart Active Monitoring™ (SAM™) concept. Genelec SAM products provide active audio monitoring systems that also have the capability and intelligence enabling them to adapt automatically and flexibly to their acoustical environments through a set of proprietary tools.