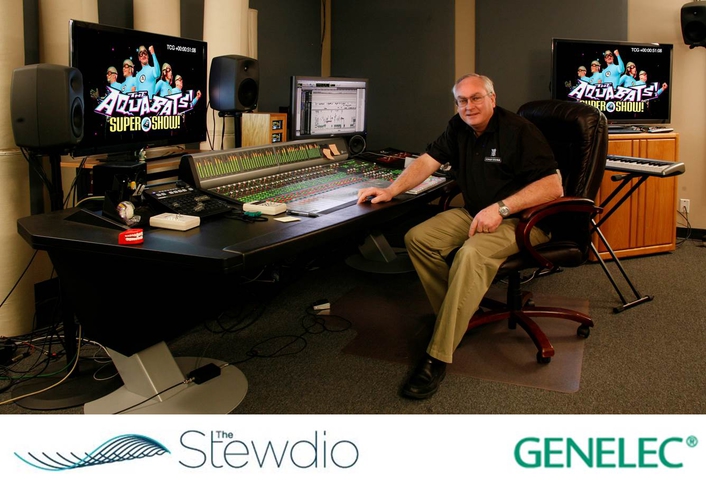 Blaine Stewart, pictured in his mixing environment at The Stewdio, featuring a Genelec 5.1 system made up of five 8240 Smart Active Monitors™ (SAM™) and a 7260 SAM subwoofer

The Aquabats! Super Show! and Kings of Crash, mixed at his “The Stewdio” facility, both earn TELLY® Award wins and Daytime EMMY® Award nominations in 2014 and 2015, and the sound on his five Genelec 8240 Smart Active Monitors™ (SAM™) and 7260 SAM sub assures Blaine that his mixes will translate properly in any medium

Blaine Stewart’s deft ears and fingers have been a mainstay of television and film sound mixing since he first started in the industry on audio crew and as mixer’s assistant for The Donnie & Marie Show at the Osmond family’s studio in Orem, Utah, in 1978. By 1986, he was back in his native L.A. working at different audio post facilities as well as mixing production for shows such as Circus of the Stars and Alf. In 2000, he opened his own post-production facility, Post Plus Sound (PPS), in Burbank, and in 2010 he moved PPS to the Salt Lake City area and renamed it The Stewdio. And he had discovered something during his time in Hollywood that he took back to Utah: the sonic and technical superiority of active monitoring from Genelec, the leader in active monitoring technology for over 35 years. Currently, he uses a 5.1 system made up of five 8240 Smart Active Monitors™ (SAM™) and a 7260 SAM subwoofer. In just the last year, these monitors have helped Blaine earn two Daytime EMMY® Award nominations, for “Outstanding Achievement in Sound Mixing – Live Action”, and two TELLY® Award wins for Sound Design/Mixing, for The Aquabats! Super Show!, which aired on The Hub channel, and Kings of Crash, which airs on the Velocity Channel. Both show were mixed at his The Stewdio facility.

“I’ve been using Genelecs since 1998, and the 5.1 system since 2008 or 2009, and since then I wouldn’t use anything else,” Stewart declares. He is a private pilot and falconer, and both of those pastimes demand a high degree of precision. He requires the same of his surround monitoring environment, and only the Genelec system can deliver that. “With this system, I know that my speakers are precisely calibrated to the Dolby film and television audio standards,” he says. “That brings an enormous sense of confidence, both to me and to my clients. When you watch those calibration indicators go from red to yellow to green, your sense of confidence in the mix process grows along with it. I know my room is perfectly calibrated and that my mixes will translate properly to any other environment, even when I move to a large mixing stage. There are simply no surprises.”

That also goes for the Genelec system’s sound quality. “The clarity, the accuracy and the transparency of the Genelecs are remarkable,” he says. “Nothing else comes close, and it makes every other speaker sound inferior.”

As Stewart begins mixes for this season’s episodes of the Velocity Channel’s Bitchin’ Rides show, the Genelec 8240’s and 7260 will be there with him. “They give me the sound I want and the precision I need,” he says. “It’s the best of everything.”