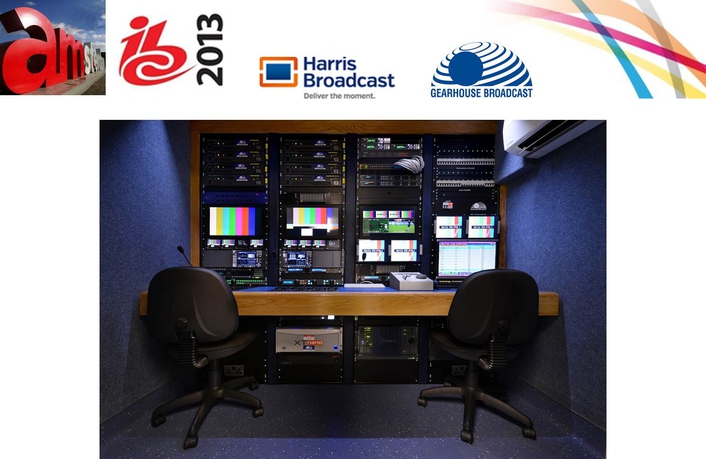 .
Harris Broadcast, a global supplier of content management and network infrastructure serving broadcasters, satellite, MSOs, IPTV, mobileTV and OTT providers, is working together with Gearhouse Broadcast to supply technology for a cost-effective and flexible HD outside broadcast (OB) concept.

This new concept targets the small event OB market, an area Gearhouse Broadcast says has been deprived of development and support. The trailer contains a compact footprint offering lower power consumption and ergonomic design while providing a discrete production gallery, audio workstations and engineering control area. Gearhouse Broadcast says this fully HD-capable OB vehicle is suited to a broad range of applications including IPTV and live web streaming productions with up to eight-camera live sports broadcasts.

“Our challenge was to design maximum functionality in minimum space and with inherent flexibility in set up and output,” commented Eamonn Dowdall, business development director, Gearhouse Broadcast. “Harris Broadcast is the logical choice given its breadth of product portfolio and the integrated manner in which the company’s workflow components operate. Without this capability, it would be difficult to build so much power and performance into such a compact OB facility.”

“Gearhouse Broadcast leads the field in terms of its ability to develop mobile broadcast solutions that are suited to a broad diversity of production scenarios,” said Mathias Eckert, vice president, sales and services, Europe & Africa, Harris Broadcast. “With this new HD vehicle, they have created a solution that will have broad international appeal and was a popular exhibit at IBC.”

About Gearhouse Broadcast Limited
Gearhouse Broadcast is a market leader in the field of Broadcast Services specializing in broadcast equipment rental, equipment sales, project solutions and systems integration, operating globally with offices in the UK, US, Australia and Qatar. The company offers a vast degree of experience and a proven track record in its involvement in major world sports events.

Gearhouse Broadcast can meet the most complex, mission critical project requirements locally or on location anywhere in the world. The people are among the best in the industry, drawing on a broad spectrum of experience, offering the latest technology equipment for hire or as part of an overall project solution.