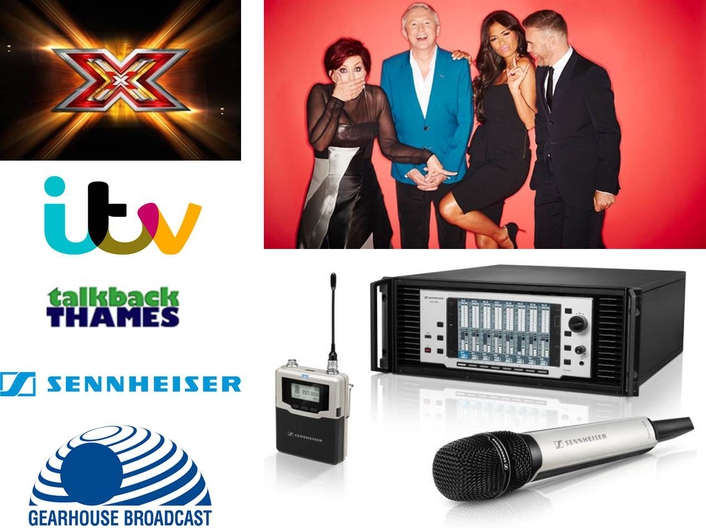 Unique audio set up combines aerial feeds for simultaneous coverage of studio and outside set
Broadcast services specialist Gearhouse Broadcast has upgraded the audio capability on hit ITV show The X Factor with the implementation of a new Sennheiser Digital 9000 system. Unlike the previous analogue Sennheiser 5000 series that it has replaced on set, the 9000 system uses uncompressed digital audio transmission for error-free sound with exceptional dynamics.

Gearhouse Broadcast – which has worked closely with Thames on every series of The X Factor and Britain’s Got Talent since 2004 – was asked by the show’s sound director Robert Edwards to source, configure and install the Sennheiser Digital 9000 system within the studio – in particular the presenter and judges audio – for the latest series of the popular TV music competition.

“Robert opted for the Sennheiser Digital 9000 system because of its superior audio quality and due to the fact that it gives him the ability to encrypt the transmitters” said Gearhouse Broadcast audio engineer Jonathan Tuck. “The interesting part of this installation for The X Factor is that we’ve combined the aerial feeds on the new system, allowing audio coverage in the outside set and the studio simultaneously.”

“I trust the team at Gearhouse Broadcast to deliver cutting edge audio solutions to me, so that I can focus on my job and help to ensure that The X Factor stays ahead of the competition” said sound director Robert Edwards.
The X Factor airs on ITV at 8pm on Saturdays and Sundays.