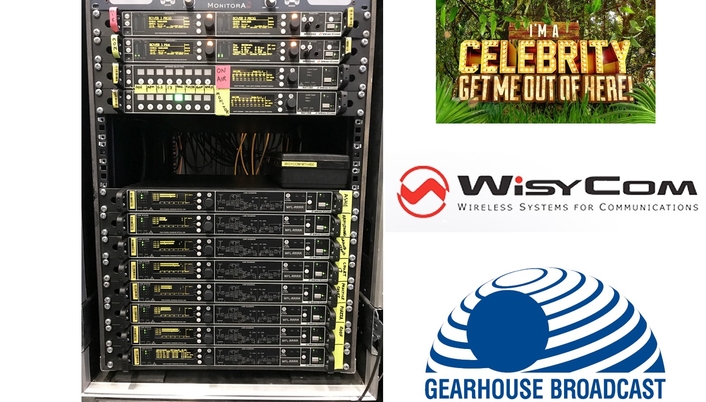 New RF over fibre audio solutions heading into the jungle for I’m a Celebrity, Get Me Out of Here! production

Gearhouse Broadcast, a supplier of technical facilities, crew and services used to capture the world’s most watched content, has purchased multiple Wisycom MFL wideband optical link systems. The deal, which was handled by audio RF specialist and UK distributor Raycom, represents repeat business, as Gearhouse has already invested in the systems for its Australian division. These have been successfully deployed at high profile events in the country such as the V8 Supercars Championship. The systems are available for hire from Gearhouse now, and have been engineered to meet the most complex RF scenarios facing broadcasters and content makers.

The new units have been bought by Gearhouse Broadcast’s UK business and the first action they saw was at a major tennis event this summer in New York – one of the most challenging RF environments on earth. The systems are now in the Australian jungle for the new series of ITV Studios’ I’m a Celebrity, Get Me Out of Here!

The 2017 production marks the tenth consecutive year that Gearhouse is providing the technical and broadcast equipment for the popular reality series. The Wisycom MFL systems enable the crew to send wireless radio microphone signals over distance without loss, making them ideally suited to supporting seamless audio from contestants and presenters anywhere within the 1.5km² jungle compound in New South Wales.

In total, there will be three transmitter sites linked by fibre that operate on the same radio frequency, providing multiple levels of redundancy. These will facilitate 36 fibre receive channels, and six IEM channels, in what will be the single largest deployment of the MFL system, anywhere in the world.

Ed Tischler, managing director at Gearhouse Broadcast UK said: “Customers’ expectations for faultless audio are higher than ever, but at the same time, there’s less spectrum space available to use. Being able to deploy Wisycom’s flexible MFL systems in challenging RF environments such as the Australian jungle, or middle of New York City, gives us the peace of mind that there won’t be a drop off in quality. We’re always at the forefront of creating solutions to our customer’s production challenges, and our decision to buy more of the Wisycom systems reflects how impressed we’ve been with their performance.”

Pyers Easton, managing director at Raycom, who will be on site in Australia supporting Gearhouse Broadcast, added: “We’re delighted to continue to work alongside Gearhouse Broadcast on these prestigious projects. The Wisycom MFL RF over fibre system offers a truly unique ‘plug and play’, flexible, fibre solution that performs in the harshest environments, making it ideal for an application like I’m a Celebrity, Get Me Out of Here! It can be installed quickly without the need for specialist knowledge and test equipment, which is important when having to rig such a large area as we do in the jungle.”

Now in its 17th series, ITV Studios’ I’m a Celebrity, Get Me Out of Here! is currently airing on ITV.

ITV I am a Celebrity
Wisycom
Gearhouse Broadcast