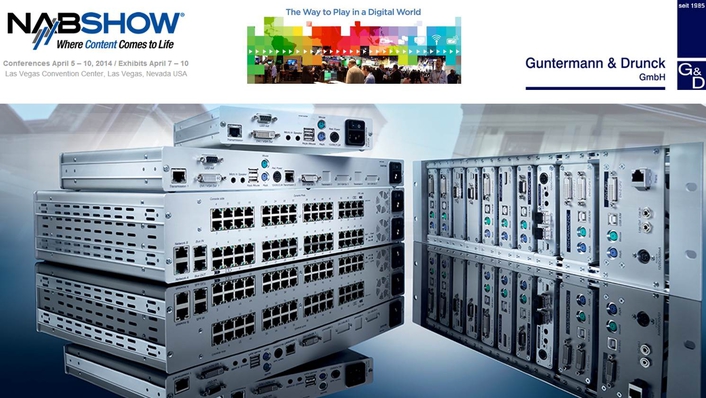 Together with US partner Apantac, Guntermann & Drunck will present their solutions at the joint booth N5212, at NAB 2014
NAB Show will gather visitors under the slogan “Where content comes to life”. To breathe life into content, the audio-video material has to take a long way with many stops. And in almost every case, KVM is one of these stops. Although KVM technology plays its role in the background – often users don’t even realize they’re working with KVM – both users and computers greatly benefit from its advantages when editing their material. 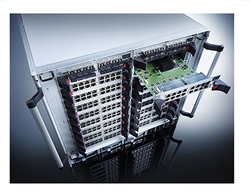 KVM portfolio at a glance
At NAB Show, Guntermann & Drunck will provide their visitors with a comprehensive overview of their KVM portfolio. Whether Windows or Linux computer, Mac graphics computer or exotic devices: KVM extenders forward any content from source to user - without any network and independently from any operating system using existing cable structures.

Whenever users need to perform a variety of tasks on different platforms, KVM switches help them switch between computers. They also benefit from a clean desk with only one set of keyboard, monitor and mouse. Another possible application for KVM: Many users need to access many computers. But they want to be able to focus on their tasks instead of sharing their workplaces with several computers including fan noise and other emissions. That’s where a KVM matrix comes into play. It lets an almost unlimited number of users access an almost unlimited number of computers. Each shared resource means saving costs.

Welcome to the matrix
The modular KVM matrix ControlCenter-Digital offers the most extensive functional range of all devices developed by G&D. The matrix enables the simultaneous operation of thousands of computers via hundreds of consoles consisting of keyboard, monitor and mouse – even over large distances. Thanks to the ControlCenter-Digital’s modularity, it is easy to replace components and expand the system to any requirements. By using optical fibres, users and computers can be placed up to 10,000 m apart from each other. Various connection modules allow you to integrate sources like VGA, DVI and DisplayPort into the KVM matrix. Comprehensive user administration, monitoring, web interface or CrossDisplay-Switching are only some of the many features that stand out in its functional range. An integrated 2048-bit RSA-encrypted Trusted Platform Module (TPM) protects any access and configuration data against exposure. Sensitive information such as login data and passwords are permanently saved in an encrypted version. In addition, a RAID1 array system protects rights management and configuration data.

See you in Vegas
As the world's largest trade fair for motion picture, film and television, NAB presents impressive numbers that emphasize this fact. With more than 93,000 participants from 156 countries and 1,550 exhibitors, NAB Show is the ideal marketplace for digital media and entertainment.
Together with US partner Apantac, Guntermann & Drunck will present their solutions at the joint booth N5212, April 7-10, NAB 2014.