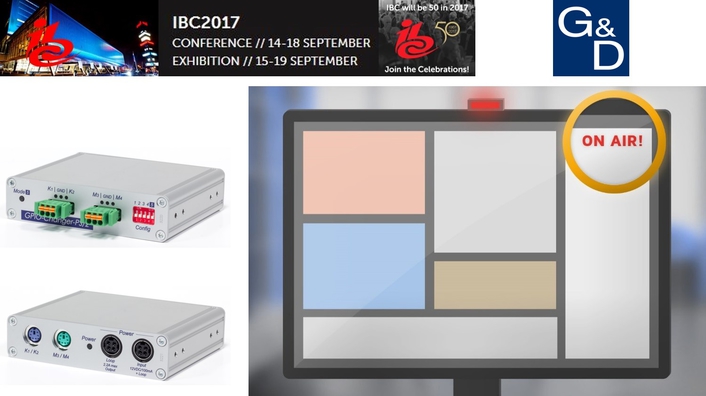 The new GPIO changer from G&D makes Tally information available to remote consoles. It can be shown there by a Tally light sign and on the OSD

Guntermann und Drunck GmbH will be giving the first presentation of the new GPIO function live and in action at the IBC2017. It enables you to transmit relevant Tally Light information to a remote work station and to indicate the active ‘on air’ system.

G&D Matrix systems give several users access simultaneously on one and the same or on different computers in studios or OB vans.  What about if the computer is ‘live’ on a programme and a producer is making undesired changes on this system? The big advantage - that the computers are externalised by KVM and various systems can be made flexibly accessible - has until now had one disadvantage: the on-air signal on the remote computer, typically in the form of a Tally Light, so additional technology and much expense was required to also show this at the workplace. So it was not only the distance that needed bridging, but the tally controller also needed to know on which computer the user was situated.

G&D has developed a specially customised function for such cases to transfer the GPIO status. The GPIO changer also makes technical installation easier. So tally switch states are transmitted from the computer via the KVM matrix and the information is made available to the user at the console.  The connected ‘ON AIR’ light informs the producer when a computer is live on a programme.

Benefit: The Tally information (or any other GPIO information) is available to the user at any time when operating remote computers and switching to CPUs - and it is available before switching to a ‘live machine’ because the status is shown by a signal at the work station, as well as on the OSD and in the computer’s selection menu.

If several producers are working simultaneously on one system, the ‘on air’ signal ensures that they don’t make undesired changes on a live computer.

G&D will be presenting the GPIO changer and many other product innovations that allow you to link typical broadcast equipment with IT at IBC2017, 15-19 September, hall 1, stand B10.