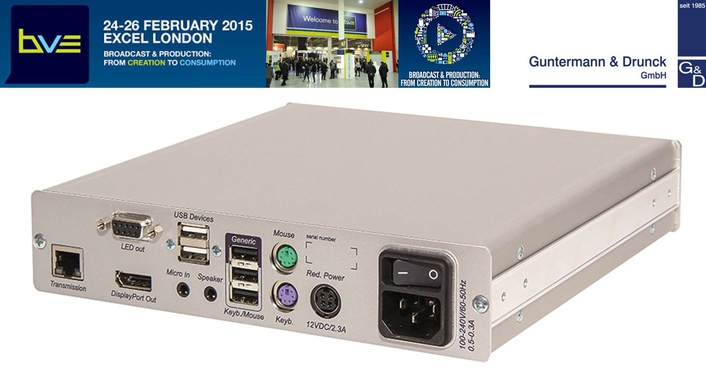 G&D look forward to welcoming their visitors at stand L44 and to interesting discussions about KVM and more
Guntermann & Drunck (G&D) will start their yearly trade shows around the globe at BVE. The German KVM equipment will make its first stop of 2015 at the ExCel in London. Here, G&D will show new solutions to extend and switch 4K video, USB 3.0 as well as new KVM extensions.

4K video via matrix
For the first time at the upcoming BVE, Guntermann & Drunck will introduce their components to transmit high resolution video via matrix to the British market. They support a bandwidth of 300 mega pixels/s allowing 2k and 4k resolutions (up to 2560 x 1600 @ 60 Hz or 4096 x 2160 @ 30 Hz).

The KVM products let users integrate computers and monitors with DisplayPort into heterogeneous matrix switch installations (ControlCenter-Digital and DVICenter). Any modules transmit signals using CAT cables or optical fibres and therefore are able to bridge distances up to 10,000 m.

Coming as another advantage of matrix applications is the support of CrossDisplay-Switching. To switch between different computers, users simply run their mouse cursor over the monitors, which can be placed in any order. Even multi-head or multi-channel applications can be integrated into any individual monitor arrangements.

Variety of signals from KVM to SDI up to USB 3.0
So far signal types like PS/2, VGA, DVI, DisplayPort, transparent USB and RS232, and audio formed the transmission standard of KVM solutions. Now G&D enable the integration of none-KVM devices or signals from third party suppliers. Together with standard KVM signals, these signals can be switched and extended via KVM matrix. In detail this means that the plug-in cards of the central module of the ControlCenter-Digital now support SDI, HD-SDI, 3G-SDI, USB 3.0 and 1 GB Ethernet. Installations across systems like the implementation of SDI feeds into live productions now become reality.

KVM extensions for 4K – now with DisplayPort
G&D have also added a new DisplayPort variant to their range of KVM extenders. The extender DL-Vision-DP transmits keyboard and video from DisplayPort sources (up to 4096 x 2160 @ 60 Hz), mouse, audio, USB 2.0 and RS232 transparent over distances up to 10,000 m using optical fibres. The new system is compatible with the existing DL-Vision series, which transmits all signals listed above except of dual-link DVI instead of DisplayPort signals. Both systems can be combined with each other.