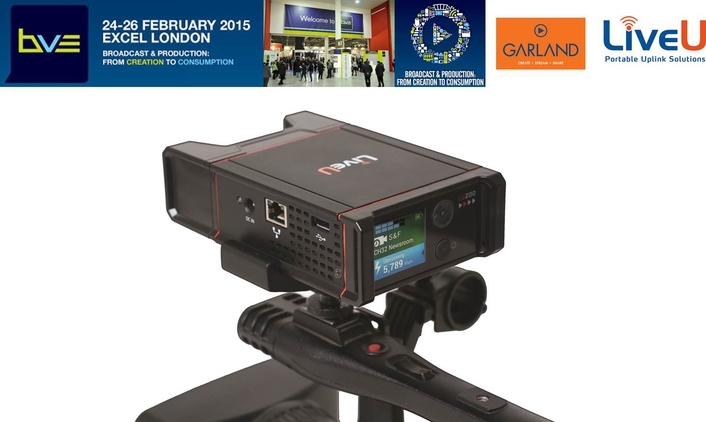 Full product demonstrations will be available on stand L16
Garland has grown to be the UK's leading provider of digital video solutions. It has proven how to turn the challenges customers face into opportunities. Commended for its technical knowledge, innovation, enthusiasm, and commitment to support excellence, it continues to be the provider of choice across a range of industries and organisations in the UK and beyond. Whether it’s OTT and broadcast delivery services, IPTV, mobile and web TV, live or on-demand, Garland has the expertise you need to succeed.

UK debut for LiveU’s new LU200
LiveU a the leader in portable live video acquisition, contribution and management solutions. At BVE 2014, Garland will present the recently launched LU200 for the first time in the UK.

Weighing just over 500 grams, the LU200 is available in a pouch or camera-mount configuration, providing two built-in modems with powerful integrated antennas in a bonded solution suitable for any video professional. The flexible LU200 can also serve as a standalone video encoder with satellite integration functionality, or be used as a LiveU DataBridge mobile hotspot for all IP applications in the field. The LU200 supports two 4G LTE/3G modems together with Wi-Fi and LAN connections and includes LiveU’s proprietary antenna modules for extra resiliency.

LU500 and LU400 also on show
Garland will showcase LiveU’s LU500, the ultimate combination of high-performance and portability for cellular uplinking. It was recently tested and described by Dom Robinson, industry consultant writing on Streaming Media.com, as, "…the flagship of the leading player in the space, is absolutely robust, extensible, and simple to use, while being packed with features and capabilities." It benefits from a small form-factor combined with exceptional functionality. Weighing approximately 1kg, the unit is powered by LiveU’s new multi-processor, video encoding engine and fourth-generation patented bonding algorithms, with up 13 network connections.

LiveU Central – Garland will also be showing LiveU Central, LiveU’s central management system. This powerful tool means that fleets of units can be centrally controlled using geo-location capabilities alongside a host of other management options. Footage can be effortlessly introduced to a back end broadcast environment creating a powerful content network.