The Future Has Started Already 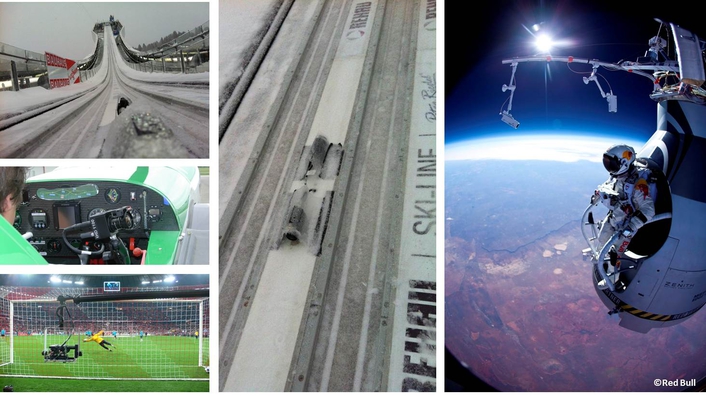 2+25 Years of Innovative Recording Technology by LMP: HD1200 at Ski Jumping, Football, AirRace and in the Stratosphere
When Friedel Lux first delved into the subject of “high definition”, the program of public and private TV networks was still crackling away on the screens of bulky tube televisions.

Mini-cameras and similar gimmicks only were featured in James Bond films – if at all. When the qualified electrical mechanic and video engineer started to follow the footsteps of super-brain Q, he didn’t have Queen and Country, but rather practical reasons in mind: Working as a technical service contractor for TV productions, he knew the growing demand for special equipment – e.g. small high resolution color displays – from his own experience.

Due to the limited number of sales, leading manufacturers like Sony or Philips were not interested to add the much-wanted gadgets to their portfolio. After thorough preparations, Lux’s plan to bridge this gap in the market took of: One of his first designs became a real triumph and entered Europe’s first HDTV broadcasting vans and even the HD editing suites of Sony USA.

In the course of the years, many more successes were to follow. Friedel Lux and his wife Sabine managed to establish the small German company as a major player in the international HDTV market. One of the latest cutting-edge products of Lux Media Plan is the HD 1200 remote camera employed to capture the most gripping attack scenes of the 2012 European Football Championship from the goalposts.

With support from the next generation (i.e. their son), Friedel and Sabine Lux have yet many more plans in the drawer. The prospect to remain in the first league of advanced image processing for the next 25 years are good. After all, the previous development has shown that there is always plenty of scope to make even the best of devices a little bit better – more compact, with higher resolution or with features only known from Science Fiction productions so far.