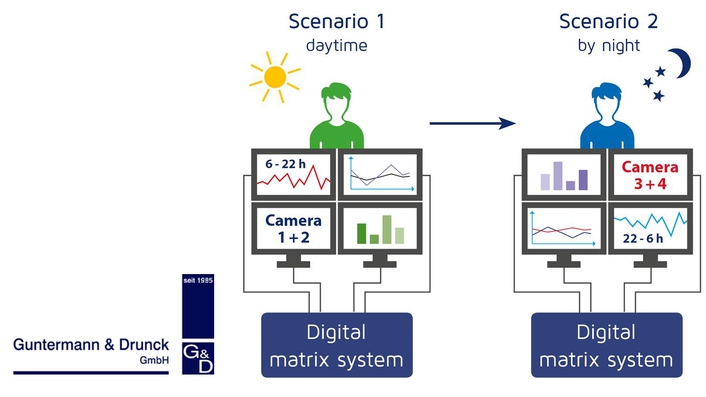 Scenario switching expands interface to control matrix systems - Example for day and night scenarios: With single command, all computers required for day or night shifts at the console can be switched at once.

Digital KVM matrix systems from Guntermann & Drunck let users access numerous computers from distributed workplaces. Since such installations tend to be rather complex and, due to the many features included, lead to an extremely powerful but complex infrastructure, intuitive operating concepts are key. Only this way, KVM technology can work as intended: As technical pioneer it adapts to everyday working life and subtly becomes an important help for operating IT equipment.

Usability has always been one of G&D’s main aspects because it guarantees the easy operation of systems even in complex installations. For even more ease of use beyond the system’s internal possibilities, an interface for external control via touch panel or separate control software can be provided. Especially when dealing with complex switching states, scenario switching helps users save various separate, manual steps via on-screen menu.

To be able to use switching states directly within the system instead of having to separately trigger them from the outside, G&D now have expanded their control interface with a feature called scenario switching. This special kind of switching stores a certain amount of existing switching states to be used at a later point when activated via one single entry using the on-screen display.

Global scenarios for adapting the entire system to changing user behaviour
Global scenarios are best applied when all consoles within a system need to be used for other tasks. By using these scenarios, users are able to change the switching conditions of the entire matrix installation. One single command allows a user to switch the computers of all consoles within a control room from day to night shift. When used in OB vans, the parameters of the entire setup of one location can be switched to another location. This way, the intended use of an installation can be changed within seconds.

Local scenarios for fast reactions to changing tasks
Whether as emergency scenario at workplaces in control rooms or for a simple, less critical change of applications: Local scenarios are used when computers at individual workplaces are rearranged. Scenario switching is useful to apply whenever switching conditions need to be changed at a certain time. Especially when it comes to multi-monitor consoles that access multiple computers at the same time, the manual and therefore sequential selection of computers for every single monitor does not only prove to be complicated, but takes extremely long, too. Here again, scenario switching allows users to store switching states for local consoles which are then available for future applications.

Of course, any login or access rights of KVM matrix systems remain the same when using scenarios. And scenario switching also serves as further support for G&D’s partners who are now able to use previously stored scenarios to program external control and thus save time and energy when setting up a control room.

Scenario switching is now available for all digital matrix systems from G&D as part of the premium option “IP-Control-API” and will be presented for the first time at IBC at stand 1.B10.