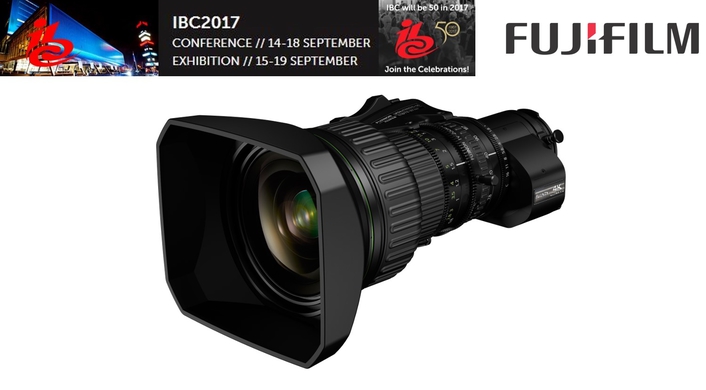 FUJIFILM Corporation (President: Kenji Sukeno) announced the release of the new "FUJINON UA24x7.8BERD," ("UA24x7.8") achieving the world's smallest (total length approx. 220.5mm) and lightest (approx. 1.98kg)*1 broadcast lens supporting 4K. The lens is scheduled for release in January 2018. Despite having a compact body, the "UA24x7.8" features a 24x high magnification zoom, covering a focal length from the wide angle of 7.8mm to 187mm. This portable zoom lens exhibits both high mobility as well as operability. This lens allows you to shoot high-definition, realistic videos for situations such as live sport broadcasting and press coverage.

The addition of this product expands Fujifilm's 4K broadcast lens line-up to 8 models in total, catering to the various needs for 4K video production. The "UA24x7.8" will be exhibited at "IBC2017", the International Broadcasting Convention to be held in Amsterdam in September, along with the full range of Fujinon Ultra HD 4K broadcast lenses, the range of high-end PL-Mount cinema lenses, and the new MK Series of Cine lenses aimed at independent and emerging film-makers.

4K video is spreading rapidly in countries such as Japan, Europe, and North America, for situations such as live sport broadcasting, press coverage, and studio shooting. In addition, with the rapid expansion of OTT*2, 4K video can now be enjoyed even on PCs and tablet devices, increasing opportunities for filming 4K video in a wide range of scenes. In recent years, with the introduction of the compact and lightweight "4K camcorder" camera, the need for compact and lightweight lenses continues to increase more and more while productions utilizing the high mobility of such equipment spread.

Looking at the popularization of 4K video, Fujifilm became a pioneer in the global industry with the release of a 4K compatible broadcasting lens in 2015. Furthermore, Fujifilm also began the sales of two compact and lightweight portable zoom lenses for broadcasting in June of this year. Fujifilm continues to contribute to the market expansion of 4K broadcasting by expanding their lens line-up.

The new "UA24x7.8" is a 4K compatible portable zoom lens that achieves the world's smallest and lightest specs for its type. With a total length of approx. 220.5mm and a total weight of approx. 1.98kg, it reduces the burden when filming with a camera on one's shoulder and shows its power when combined with a "4K camcorder." It features a 24x high magnification zoom covering a focal length from 7.8mm to 187mm making it is capable of capturing a wide variety of different scenes. This lens is capable of shooting realistic videos with a focus on the subject, and is perfectly suited for live sport broadcasting or press coverage productions which require high mobility.

In addition, by thoroughly reducing chromatic aberrations, which are a common occurrence in telephoto zooms, it is also possible to shoot utilizing "HDR (High Dynamic Range)." It is possible to reproduce rich tones even when shooting scenes with intense contrast, such as stadiums at dusk.

FUJINON lenses by Fujifilm are known for high quality eloquent images, and have been used in various production sites including movies, TV commercials and live sports broadcasts around the world. Fujifilm will continue to tap into its optical, high precision forming and assembling technologies that have been nurtured over many years in the indutry, to further expand and enhance its 4K lens line-up, thereby addressing the diversifying needs of production sites.