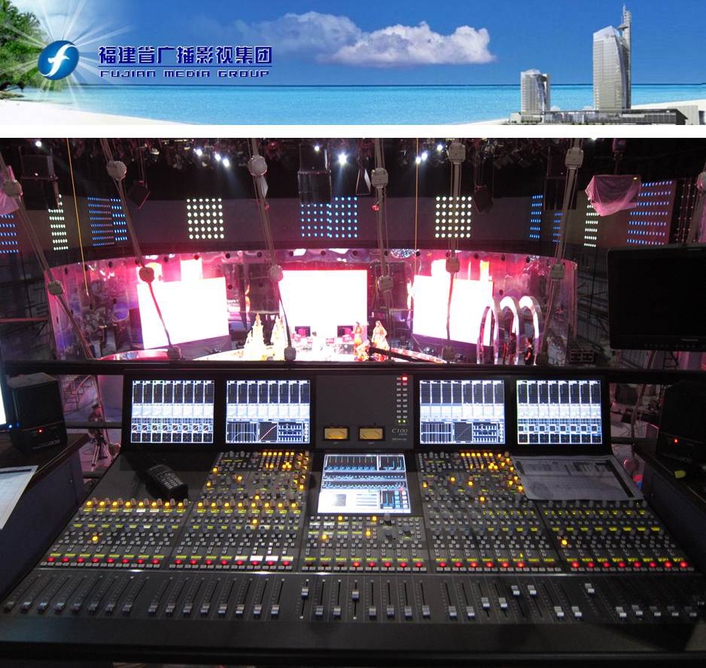 “The decision was made to build an entirely new production facility to meet the demands of HD broadcasting and our expanded production schedule, so we purchased new equipment for most of our studios,” says Mr. Huangwei, audio section chief for Fujian TV. “The SSL C100 HDS was the perfect choice to handle the variety/quiz-type programs we produce. It is extremely powerful and agile, while the compact form factor fits well into our new live studios.”

Fujian TV (FJTV) is the biggest television station in East China's Fujian Province, delivering nearly 140 hours of programming each week over two channels to 30 million viewers. The C100 is used for the live-to-air production of Happy Choir, a nationwide chorus competition based on The Last Choir Standing program presented by the BBC; the Chinese version of the BBC program, Friends Like These, where male and female teams compete for prizes; and This Time Tomorrow, an educational quiz show where contestants play for prizes.

“These programs feature a live studio audience, fast-paced lighting and computer-driven backdrops, and many camera cuts to accelerate the action,” explains Huangwei. “One C100 services our 800 square meter room, Studio 800, and the other is in the 1,000 square meter studio, aptly named, Studio 1000. While the programs are live to air, we do capture to a Pro Tools LE DAW. The C100 provides plenty of buses and is much more flexible than other consoles. We use it for the broadcast sound of each show and we are using the buses to control different groups of loudspeakers for the audience, including a center line array, subwoofer and front fill.”

“The station supplies programming via satellite that covers all of China, Hong Kong and Taiwan, so we wanted to have the very best equipment available for our productions,” concludes Huangwei. “The C100 HDS is an integral part of our expansion.”