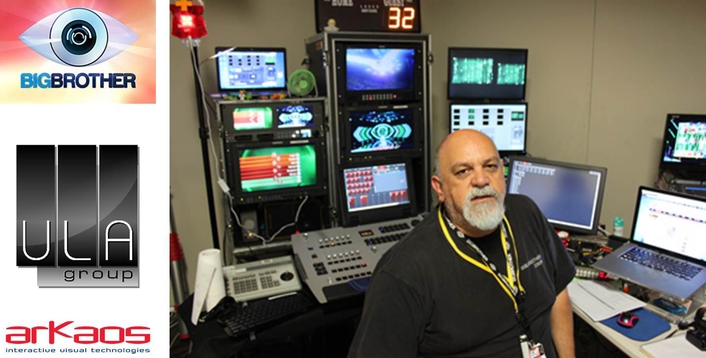 Calvi has been pushing buttons and turning dials behind the scenes of the re-launched Big Brother TV Show in Australia, creating exciting visual effects and lighting for the ninth series of this reality television experiment.

Using ArKaos MediaMaster Pro for the live Video Streaming, Calvi had an opportunity to implement the newly released ArKaos Video Mapper extension into his designs. The LED tubes on the walls of the live show studio were also pixel mapped using the latest version of Arkaos MediaMaster Pro.

A VuePix P25  LED screen was used as the pupil of the iconic Big Brother Eye built into the back of the set, together with another hi-resolution screen to capture all the dynamic video content produced by Calvi. The ArKaos software enabled Francesco to stream the same media content to both LED walls seamlessly despite them being different resolutions, pitches and sizes.

Francesco was very happy with the overall results produced. He comments: “ArKaos Video Mapper gave me great flexibility when working on my designs and allowed me to bring my lighting shows to different levels. Using the MediaMaster Pro nonstop for over 3 months, the computer actually died and needed to be replaced at one point, while the software was reliable throughout all the series”.

“As always,” reports Lenka Satankova, ULA Group’s marketing co-ordinator, “we had great support from Francesco on this project.”

The latest Big Brother series was produced and broadcasted by the Nine Network. It continued to receive high TV ratings throughout the whole series.

About ArKaos
ArKaos is a leading provider of real-time visual processing technologies for live visual performance. The company develops visual synthesizers that trigger and manipulate graphic content for display on large screens at concerts, clubs, etc.
Founded in 1996, ArKaos started as a software company but today it also develops the ArKaos A30, a unique hardware media server that delivers an unrivalled performance in speed, effects and manipulation of simultaneous high-definition videostreams.