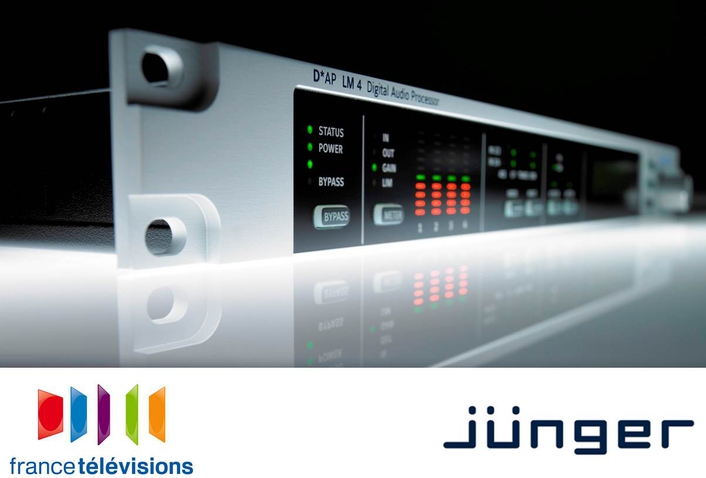 The decision by France’s CSA (Conseil Supérieur de l’Audiovisuel) to link the EBU’s Loudness Recommendation R128 to its own audio-visual legislation is now focusing the attention of French broadcasters on purchasing loudness processing equipment that complies with the EBU R128 standard.

One manufacturer that has already benefited is German dynamics specialist Jünger Audio, which recently won a significant order for its loudness processing equipment from the French public broadcaster France Television.

Jünger Audio’s Managing Director Peter Poers says:  “Our EBU R128-compliant loudness processing equipment has already been installed at every major broadcast facility in Germany and Switzerland, and we are delighted that France’s public broadcaster has also chosen to endorse our technology. Broadcasters have recognised the benefit of using our proprietary LEVEL MAGIC™ adaptive control algorithm and like the fact that it allows them to adjust the audio level from any source at any time, with no pumping, breathing or distortion. As a result it has become the algorithm of choice for line and real time processing.”

France Television is a state-owned company that consists of a number of channels including France 2, France 3, France 4, France 5 and France Ô. The broadcaster, which is primarily funded by revenue from television license fees, is highly influential with more than 40% of the French population watching its programming every day. As a public broadcaster it is firmly committed to providing high quality news, sports and entertainment programming that reflects a diversity of views.

The order France Television has placed with Jünger Audio is for a total of 73 loudness processors – 22 D*AP LM4 four-channel units and 51 D*AP LM2 two channel units. These are now being rolled out to France Television facilities and will eventually cover all Paris-based channels, plus all 23 regions, with each region having one Jünger Audio processor for its main transmission path and another for back-up.

France’s CSA decision to link with EBU R128 means that previously unenforceable laws on loudness can now be better defined and therefore enforced. This will protect viewers from the unpleasant and unpopular lurches in the volume of programmes and adverts that have resulted worldwide in so many complaints over the years.

In order to comply with the new law, French broadcasters must now ensure that all production and distribution equipment they use is compliant with EBU R128. They must also manage audio correctly and ensure that all material provided by production houses also complies with the new ruling. The new law is being introduced in three phases: normalization of short programmes from 1 January 2012, of live programmes by June 2012, and of all programmes by the end of 2012.