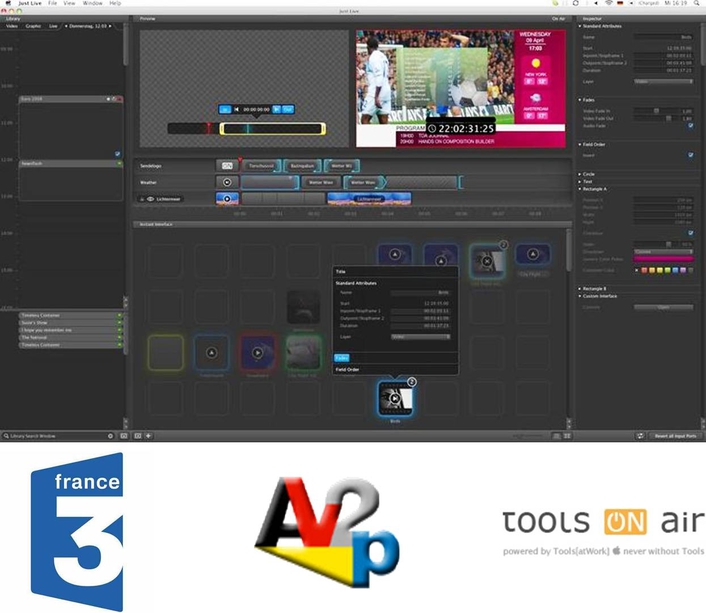 AV2P, the official distributor of ToolsOnAir products in France, was chosen from among a number of companies bidding for the project of modernizing the broadcaster's ingest and production workflows. AV2P will work with France 3 to upgrade the network's systems to run the fully Apple OS X based systems.

"We were looking for a system that would provide a solid, dependable ingest solution combined with the ability to natively read the MXF files created," explains Jean-Christophe Auclerc, France Télévisions' leading project manager. "We needed a solution that would provide full user autonomy and still allow for deep integration into our existing networking and production infrastructure."

Auclerc continues, "The combination of ToolsOnAir's just:in and just:live from enables us to use a single machine for ingest and native MXF playback, which creates a very cost-effective solution. It offers the complete set of standard codecs, as well as an adaptation of the MXF XDCAM codec that we need for our workflow."

Auclerc adds that ToolsOnAir's Broadcast Suite was immediately appealing, particularly for its ergonomical design, and that ToolsOnAir's engineers undertook the added incentive to enrich and adapt their software to meet the broadcaster's specific needs. "The integration with other systems based on our specific XML metadata specification turned out to be very easy and straightforward," he says. "We're particularly pleased to confirm ToolsOnAir's system is open and expandable - that's something we were looking for as well."

"When we first developed our Broadcast Suite, our objective was to show people that it was not just possible, but practical, to run an entire TV broadcast facility on an Apple Mac," observes Gilbert Leb, Director of Sales and Marketing at ToolsOnAir. "It's a solution that's ideally suited for smaller and mid-sized regional and Internet-based broadcasters, enabling them to create a professional broadcast environment without the prohibitive cost of investing in expensive traditional equipment. Surprisingly, we've found that larger, established TV broadcasters are also quite interested in Broadcast Suite."

As Jean-Christophe Auclerc points out, the evolution of video and broadcast technologies and the complexities of multiple formats and operating systems has made solutions like ToolsOnAir's even more attractive. "These days, we're increasingly confronted with file compatibility issues," he says. "Dedicated hardware systems are gradually giving way to IT-based software solutions, which offer greater flexibility and easier maintenance for a lower overall investment. With the deployment of ToolsOnAir's solutions to our regional outlets we are standardizing our platforms in order to guarantee a homogeneous IT infrastructure."