The main concept of a professional vision mixer is the bus, basically a row of buttons with each button representing a video source. Pressing such a button will set the video out of that bus. Older video mixers had two equivalent busses (called the A and B bus, such a mixer is known as an A/B mixer). One of these busses could be selected as the main out (or program) bus. Most modern mixers, however, have one bus that is always the program bus, the second main bus being the preview bus. These mixers are called flip-flop mixers, since the selected source of the preview and program busses can be exchanged. Both preview and program bus usually have their own video monitor.

A transition between two buses 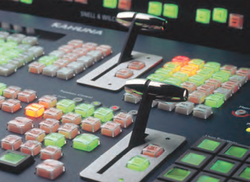 Another main feature of a vision mixer is the transition lever, also called a T-bar or Fader Bar. This lever, similar to an audio fader, creates a transition between two buses. Note that in a flip-flop mixer, the position of the main transition lever does not indicate which bus is active, since the program bus is always the active or hot bus. Instead of moving the lever by hand, a button (commonly labeled "mix" "auto" or "auto trans") can be used, which performs the transition over a user-defined period of time. Another button, usually labeled "cut" or "take", directly swaps the busses without any transition. The type of transition used can be selected in the transition section. Common transitions include dissolves (similar to an audio crossfade) and pattern wipes.

A signal can be selected for keying into the program

The third bus on a vision mixer is the key bus. A mixer can actually have more than one of these, but they usually share only one set of buttons. Here, a signal can be selected for keying into the program. The image that will be seen in the program is called the fill, while the mask used to create the keys' translucence is called the source. This source, e.g. chrominance, luminance, pattern (the internal pattern generator is used) or split (an additional video signal similar to an alpha channel is used) and can be selected in the keying section of the mixer. Note that instead of the key bus, other video sources can be selected for the fill signal, but the key bus is usually the most convenient method for selecting a key fill. Usually, a key is turned on and off the same way a transition is. For this, the transition section can be switched from program (or background) mode to key mode. 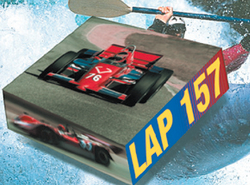 These three main buses together form the basic mixer section called Program/Preset or P/P. Bigger production mixers may have a number of additional sections of this type, which are called Mix/Effects (M/E for short) and numbered. Any M/E section can be selected as a source in the P/P stage, making the mixer operations much more versatile, since effects or keys can be composed "offline" in an M/E and then go "live" at the push of one button.

After the P/P section, there is another keying stage called the downstream keyer. It is mostly used for keying text or graphics, and has its own "Cut" and "Mix" buttons. After the downstream keyer is one last stage that overrides any signal with black, usually called FTB or Fade To Black.

The transition from SD to HD 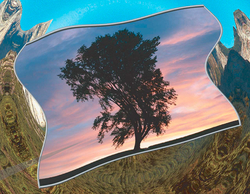 Modern vision mixers also have additional functions, such as machine control, aux channels for routing signals to other sources than the program out, macro programming and DVE (Digital Video Effects) capabilities.

Today mixed SD/HD or 4:3/16:9 formats are almost the rule for international productions. Therefore we will introduce four top-end switchers that are routers, digital video effect units, servers, VTR controllers and editor – all in one: the Grass Valley Kayak, the Ross Vision, the Snell Kahuna and the Sony MVS-8000G. Despite often very complex configurations, they still must remain easily usable for the operator. And the transition from SD to HD constitutes a particularly big challenge for today’s production vision mixers

The architecture of the Kayak HD and Kayak SD switcher families makes them highly portable yet flexible. Both offer an internal six-chaannel RAMRecorder image store that records and nplays out clips and stills. The standaard capacity of the RAMRecorder unit allows approximately 30 seconds of clip playback in HD and 2 minutes, 45 seconds in SD. The KlipCaache option doubles this capacity to approximately one minute in HD and 5 minutes 30 seconds in SD. Kayak HD and Kaayak SD control panels are available in 1-, 1.5-, 2-, 2.5- and 3 M/E versions. Panels of 1.5 M/E and above feature mnemonic source displays on each M/E for easy input identification; the 3 M/E panel models feature source display on each M/E and program row. Multiple control panels or M/E delegatio let you control up to 4.5 M/Es in a single frame.

Vision MD and MD-X allow to work in SD or HD format. Vision MD supports all popular formats including 480i, 570i, 720P, 1080i and 1080P/24. Powered by the MD-X Live Production Engine it has 96 multi-definition inputs, 48 multi-definition configurable outputs, 16 DVE channels, 28 internal keyers, 4 WARP generators, 19 internal ethernet-connected media stores and 19 classes of external interfaaces. The Vision MD Sries includes a hard disk drive in the rackframe that is used to store switcher memories, stills, animations, video clips and more. The same video processing frame is used for the 2-, 3- and 4-M/E switchers. The preview overlay option allow the technical directors to keep their eyes on the action by presenting critical information over the preview monitor output. Included are VTR aand video server time code, a count up/down timer, source ID, safe title, with each individually selectable via handy control panel buttons.

The Vision display is a color touch screen with a number of never before seen features: Two independent menues are displayed simultaneously. No more multiple keystrokes to move between menus when building key frames. Adjusting video parameters while controlling an externaal device like a server or robotic camera is easy with dual display.

Powered by exclusive FormatFusion signal processing technology from Snell, Kahuna breaks the video format barrier enabling seamless real-time mixing of SD and HD video, in any format, without compromise or loss of quality.Kahuna integrates any SD source material including handheld camera feeds, graphics, captions or archives into HD productions without the need for complex and costly outboard upconversion. It also allows HD material to be incorporated into SD productions without downconversion.

Designed for live mobile, studio and news production, Kahuna offers a familiar nuser interface while delivereing superior multiformat picture quality in busy, fast-paced, live production environments. In addition to its flexibility during live production, Kahuna offers a clear and planned transition path in upgrading to new media technologies. The switcher can be installed initialy with SD only capability and later updated for multiformat operation through a simple software upgrade. Kahuna allows a gradual, controlled transition to HDTV, butting the customer in total control of when to move to the next generation of television technology.

Kahuna shines when “OnAir” requirements are most demanding – such as in news and sports productions requiring multiple graphics placements or elegant animated transitions with sound to multiple sources.

The Kahuna range offers 2-, 3- and 4-M/E models. All M/E banks are identical with each providing aa most comprehensive set of integrted, easy-to-use capabilities. Every M/E provides multiple output control when the requirement is necessary for different language graphics and substituted backgrounds.

FormatFusion enables Kahuna to offer total format freedom for inputs aand outputs. Any of the 80 inputs are free to be assigned to be SD or HD with no restriction. Working as a part of each M/E, this provides flexibility to create powerful composotions made up of SD and HD sources, plus provide SD and HD outputs.

Sony – Flexibility for Today and Tomorrow

One of the unique and most powerful features of the MVS-8000G Series is the use of the optional MKS-8450G format converter board. This option provides up- and down-conversion between HD (1080i and 720P) and SD (480i and 576i) and cross-conversion between 1080i and 720P at both inputs nd outputs. By adding a single format converter board, conversion for eight inputs and two outputs is possible. An MVS-8000G Series switcher can therefore be configured to seemlessly handle both SD aand HD sources and provide independent SD aand HD outputs, thus minimising system costs and complexity.

The MVS-8000G processor can be configured to suit the exact requirements of each particular user in terms of number of I/O, number of M/E banks and which processing options are supplied. The processor can be configured for 2-, 2.5-, 3-, 3.5- or 4-M/E operation and can accept up to 80 inputs, 48 assignable outputs and 8 monitor outputs – enough for the largest of programme requirements.

The design philosophy behind the switcher system has resulted from extensive customer feedback. The result is customisable control panels with highly intelligible indicators and buttons, advanced networking with system peripherals, integrated control and maintenance, powerful M/E functions and effects, complete system scalability and special considerations for use in mixed PC and AV environments.