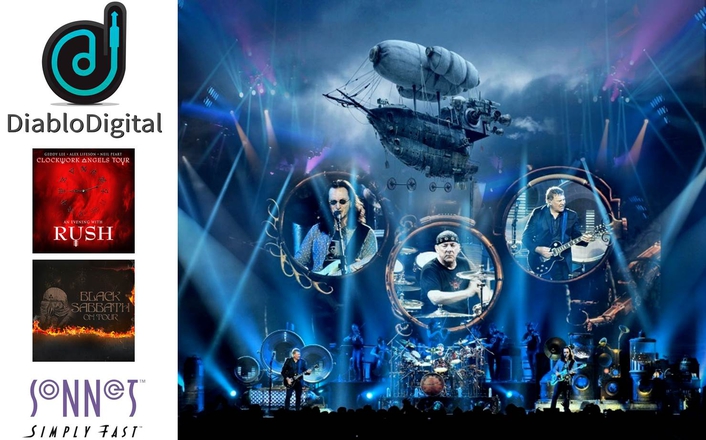 Both Madix and Price have extensive FOH résumés dating back to the 1970s, mixing sound for some of the biggest names in rock music. Madix has worked with Rush, Van Halen, Shakira, Def Leppard, and many more, and Price has worked with Black Sabbath, ZZ Top, Kiss, and Aerosmith, among others. For several years, both had been working on separate paths to develop a portable, rackmount system that would integrate all necessary interfaces and peripherals for on-location music recording. Aside from being the source of live recording products, live multitrack recordings provide FOH engineers an invaluable tool for perfecting the mix on-location and making the most of limited rehearsal time at each venue. 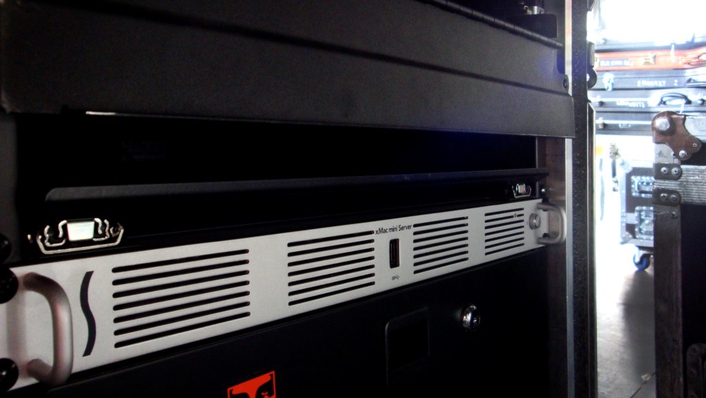 While earlier efforts included the less portable and more expensive Mac Pro® computer, Madix and Price realized they could improve on the concept by leveraging the low cost and small footprint of the Mac mini. Working together, they built a new solution around Sonnet's xMac mini Server, a Thunderbolt-to-PCIe 2.0 expansion system and 1U rackmount enclosure that securely holds the Mac mini in place. 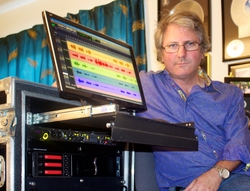 "With its Thunderbolt connectivity and onboard storage of up to 2TB, the Mac mini can provide the server capabilities and computing power of a box many times larger, but at a cost many times lower," said Madix. "Combined with the right expansion systems and peripherals, the Mac mini can be turned into a high-power multitrack recording system for live shows of any size. The xMac mini Server bridges the gap between the Mac Pro's extensibility and the Mac mini's portability and affordability, enabling us to rackmount a Mac mini where it can be easily cabled and extended with Thunderbolt connectivity."

Madix added, "I recently ran a 91-track, two-plus-hour stress test using the xMac mini Server and an Avid HD Native card connected to an Avid Omni interface. I was working in Pro Tools|HD with hundreds of plug-ins instantiated. Amazingly, the Mac mini handled it all with no issues and only 57 percent of CPU utilization." 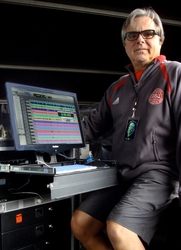 The xMac mini Server increases the Mac mini's functionality by connecting two PCIe 2.0 expansion slots to the computer's Thunderbolt port, with an additional port on the chassis for daisy-chaining to other Thunderbolt devices. Panel-mount cables inside the enclosure extend the Mac mini interfaces to the outside of the xMac Mini Server enclosure, enabling quick connection of USB 3.0, HDMI, and Gigabit Ethernet cables without the need to access the computer. Diablo Digital's custom mixing and recording system includes the Avid Pro Tools|HD audio recording and editing software running on the Mac mini, with the xMac mini Server housing a Pro Tools|HD Native PCIe card for interfacing with the VENUE desk. A Sonnet Tempo™ SSD PCIe storage card in the second slot serves as a high-speed, reliable record drive. This means the new recording system is capable of capturing 64 tracks of HD audio content, more than enough for most musical acts.

For larger productions, the Diablo Digital team is including Sonnet's Echo Express III-R 2U rackmount Thunderbolt 2-to-PCIe card expansion chassis with the Sonnet RackMac™ mini rackmount enclosure for the Mac mini. The Avid-qualified Echo Express III-R offers phenomenal speed through support of 20 Gb/sec Thunderbolt 2 technology, and with a mounting depth of only 16 inches, provides the ideal component for interfacing the Pro Tools|HDX cards with the Mac mini.

"Adding the Echo Express III-R, additional Avid cards, and built-in mobile rack storage enables us to record up to 128 tracks simultaneously, which means we can deliver a solution with the horsepower for even the most elaborate productions — and still at a cost that's less than our original Mac Pro-based system," Price said. "Thanks to the possibilities afforded by the Sonnet Technologies and Avid gear working with the Mac mini, we saw an opportunity to build a business around providing Pro Tools recording systems to musical acts of all sizes. We really believe these systems will change the landscape of the music business."

In the first quarter of this year alone, Diablo Digital has already supplied systems for the Rolling Stones, Kanye West/Jay Z, Eric Clapton, Justin Timberlake, Dierks Bentley, Black Sabbath, and other large tours, as well as for many smaller, budget-conscience acts. 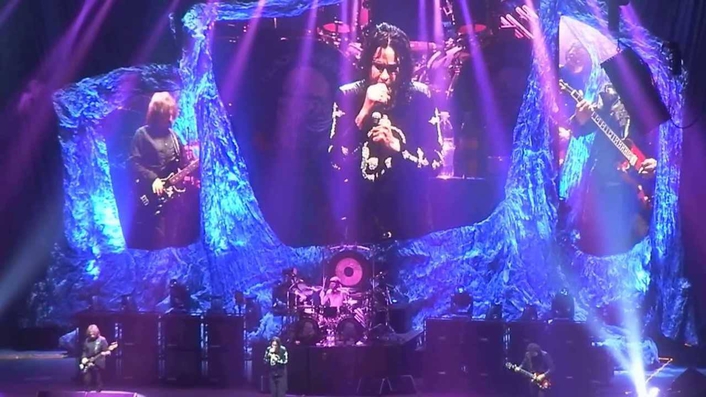 "Brad and Greg are two of the most prolific FOH engineers in the touring concert world. Now they've applied lessons learned from nearly 60 combined years of experience to offer a solution that can meet everyone's needs, from the most discerning rock act performing in the largest arenas to the club band looking for an affordable way to professionally mix and record its live shows," said Greg LaPorte, vice president of sales and marketing, Sonnet Technologies. "With our xMac mini Server and Echo Express III-R at their core, these new-generation FOH systems have changed the economics of high-end digital audio recording — putting it within the reach of virtually any musical act on tour, as well as indie recording studios and other groups with more limited budgets, such as houses of worship." 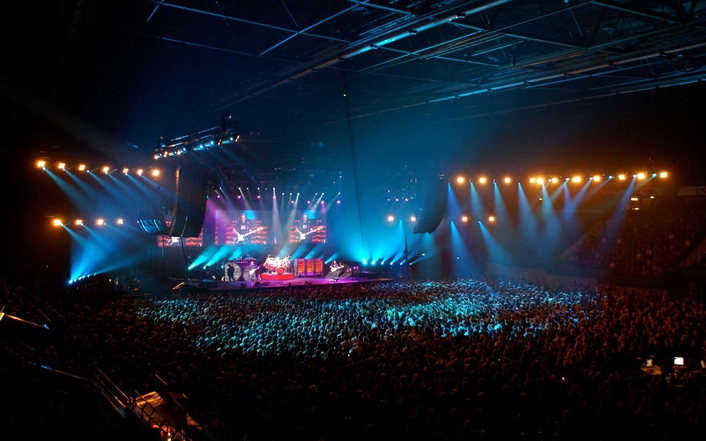 About Diablo Digital Inc.
It's Live. We Get It. Established in 2013 by renowned FOH engineers Brad Madix and Greg Price, Diablo Digital Inc. builds high-quality, easy-to-implement multitrack touring recorders that offer artists affordable, turnkey, live-recording systems for tours, installations, festivals, one-off shows, and broadcast. Providing more than just a way of capturing performances for posterity, Diablo Digital's systems enable FOH engineers to perfect the mix at each venue, make the most of limited rehearsal time, and with daily use, capture the best performances of the tour. The company's systems are custom-configured, scalable, and affordable, with turnkey systems designed to support Avid VENUE, Digico, Midas, and all mixing platforms available. Diablo Digital delivers expert support and consultation on every aspect of any project, and Avid 24/7/365 Technical and Advance Replacement support. With its principals' nearly 60 combined years of experience in the industry, Diablo Digital's systems have quickly gained a reputation for excellence, and have already recorded or mixed performances for The Rolling Stones, Kanye West, Jay-Z, Eric Clapton, Justin Timberlake, iTunes Music Festival at SXSW, Rush, Black Sabbath, One Republic, Trisha Yearwood, Outkast, Dixie Chicks, and many others.

About Sonnet Technologies
Sonnet Technologies Inc. is a leading provider of storage systems, Thunderbolt™ technology PCIe® expansion products, interface cards, and media readers for professional users in the audio, video, and broadcast industries. Sonnet's Thunderbolt expansion products enable the use of pro audio I/O and DSP cards, pro video capture and transcoding cards, interface cards, and other high-performance PCIe cards with mini, portable, and all-in-one computers. The company's product line features a range of high-performance, cost-effective, and reliable RAID storage solutions. For more than 27 years Sonnet has pioneered and brought to market innovative and award-winning products that enhance the performance and connectivity of Mac®, Windows®, and other industry-standard computers.