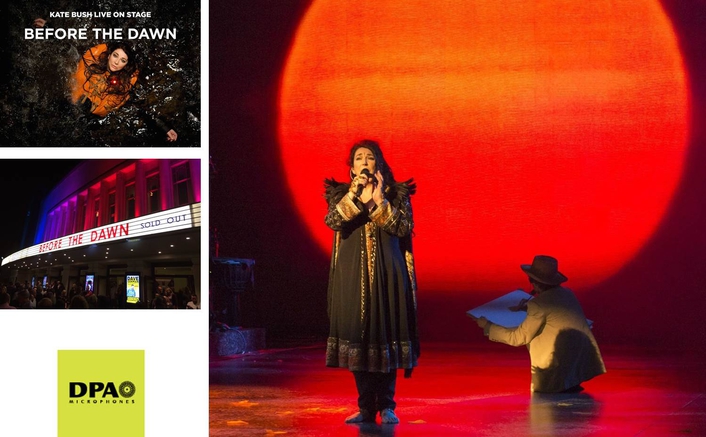 The choice was made after extensive testing and Walsh says he is delighted with the results the various DPA mics delivered
Greg Walsh, Sound Design and Front of House Mixing Engineer, chose a selection of DPA microphones to capture the sound of Kate Bush's hugely successful Before the Dawn series of concerts at London's Hammersmith Apollo.

After 35 years away from the live stage, these much anticipated concerts received high praise from reviewers and fans who frequently commented on the exceptional audio quality and the clarity of Kate's vocals.

The decision to use DPA microphones was made following extensive testing by Greg Walsh and the production team, which included renowned audio engineer Stephen Taylor who was responsible for Kate's vocal processing and monitor engineer Ian Newton, who sadly passed away earlier this month.

"I knew about DPA, having originally discovered Bruel and Kjaer [DPA's predecessor] in the mid-1980s," Walsh says. "The larger capsule microphones such as the original B&K 4007 have been my first choice for acoustic guitar, drum overheads or ambient pairs for percussive and orchestral sources ever since."

For the Hammersmith Apollo shows, Walsh specified  DPA's d:vote™ 4099 Instrument Microphones for a number of instruments, including percussionist Mino Cinelu's rig where they worked well on the Bougarabou, Djembe and Floor Tom.

"Their small profile allowed us greater positioning flexibility and the supercardiod pattern gave us tight focus on the sound source and excellent rejection," he says.

Walsh also specified a DPA d:dicate™ 4011 Recording Microphone as a central focus mic for shakers and other hand held percussion, wireless DPA d:screet™ 4060 Miniature Omnidirectional Microphones for the accordion and tambourine, and a  wireless d:vote 4099 Instrument Microphone for the djembe in the 'minstrel' sections of the show.

"Despite their small size the d:vote 4099s proved to be very robust and reliable. They were quiet, had excellent transient response and gave me a very workable natural sound," Walsh says.

The Before the Dawn shows also gave Greg Walsh an opportunity to try DPA's hand held d:facto Vocal Microphone for the first time.

"Finding a vocal microphone with a dynamic range capable of capturing the broad range of vocal performance and styles was obviously paramount," Walsh explains, "We tested most of the available handheld microphones before deciding that the d:facto was the right choice. We opted for the wireless version, which we used with a Shure UHF-R system, and it proved to be very reliable and stable."

In total, seven d:facto microphones were used on stage - five for the Chorus and two for Kate Bush. DPA also created a custom headset mic with a d:facto 4018V capsule that allowed Kate to perform with her hands free.

"We also used two DPA d:screet 4060 Microphones for the filmed segments of the show which were shot in a water tank at Pinewood." Walsh says. "They were small enough to be concealed in a life jacket and were also very resilient to water ingress."

Since completing the Before the Dawn shows, Walsh has been working on other projects, including a recent concert in Russia that involved a rock band and a 64 piece orchestra.

"I had no hesitation in specifying DPA d:vote 4099s for the orchestra, all members of which were individually mic'd," he says. "DPA are an excellent company and provided fantastic support. I have known many of the team, in particular Ralph Dunlop and Pete Wandless, for many years and would like to thank them for their support."