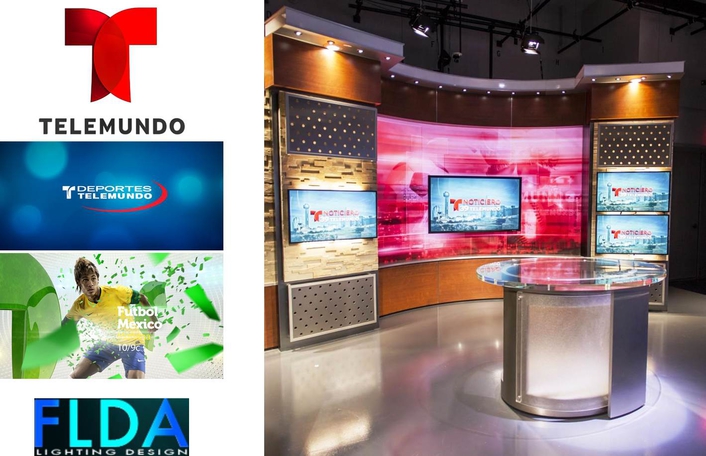 .
Ferri Lighting Design & Associates (FLDA) today announced that it has designed the lighting for Telemundo Sports’ new set in Miami. The multifunction studio houses four other Telemundo shows, and encompasses new lighting schemes. Telemundo Sports expects its work with FLDA to continue into 2014, in order for its studios to become 100% LED facilities.

“Spanish television has been trapped in the ‘90s when it comes to set design. Bruce was the first person recommended to us for lighting design. Once Bruce audited our studio lighting situation, we never looked back,” said Christopher Suarez, the director of production operations for Telemundo Sports. “We had not had a studio refresh in 10 years and the fact that we will become the World Cup network in 2015 prompted us to revamp our lighting. We also want to become a fully LED-lit operation next year, so that we can embody NBC’s ‘Green is Universal’ theme.”

FLDA’s Emmy Award-winning team has achieved renowned reputation for its sports studio installations over the years, including multiple designs for ESPN, the MLB Network, and others. FLDA has a long history with NBC, including groundbreaking work for CNBC, MSNBC, as well as NBC Nightly News, ‘Saturday Night Live,’ and ‘The Today Show,’ among others.

“The Telemundo Sports team provided us with an ideal opportunity to apply a unified design to multiple facilities, and help evolve a look that embodies consistency with the NBC Sports Group family,” said Ferri. “We look forward to helping Telemundo Sports become an all-LED network next year.”