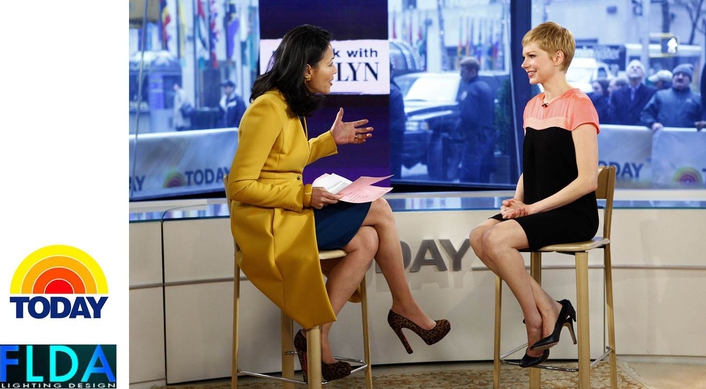 New ‘TODAY’ Show Set Provides Natural Light; Highlights ‘Green is Universal’ Program
Ferri Lighting Design & Associates (FLDA) today announced that it has designed and installed what is the first all-LED set for a national morning T.V. show, for  the re-designed 30 Rockefeller Center ‘TODAY’ show set, which launches today. FLDA provided a warm, and brighter, look to the set, which accentuates the upbeat tone of the show, and fully complements the high-definition production. The all-LED lighting design follows NBC Universal’s successful ‘Green is Universal’ initiative to implement green production and post-production technologies throughout its facilities.

TODAY and NBC sought the latest LED technology for energy savings, as LEDs enable the production staff to change the color temperature of the lights to match daylight as it comes through the windows. This flexibility allows the studio to reflect the same color temperature as what is outside their window without the use of color correction on the windows.

“The value of our long history with NBC is that we know the territory – the sets, the infrastructure, the production crews – and we know how to push the technical envelope without encroaching on the talent or the overall look of a show,” said Bock. “With ‘TODAY,’ we were able to create a design that was modular, and provided creative options that would augment the overall output of the show’s content.”

In addition to the new ‘TODAY’ set, FLDA’s Emmy Award-winning team has created expert lighting for other ‘TODAY’ projects, including a recent shoot in the Hawaii. FLDA maintains a long-running affiliation with NBC Universal programming, including program specials such as NBC ‘Town Hall on Climate Change’ and the NBC Job One Panel, as well as the complete lighting design for the NBC Sports Network.

“We worked long and hard to ensure that everything we did with the ‘TODAY’ show lighting conformed to the brand elements of the on-air product,” said Bruce Ferri, president and senior designer of FLDA. “We also had a receptive partner in NBC Universal for our green lighting protocol, and ‘TODAY’ was a solid testimonial to how you can create efficient and elegant lighting while also maintaining green standards.”