Consoles Connected Through SSL MORSE Router and SDI-MADI to Address Multi-format Workflow
Solid State Logic is pleased to announce the installation of an additional four C10 HD Compact Broadcast Consoles at Fox NE&O.  These consoles are connected through a MORSE Router, 13 Alpha-Link Live-R and seven SDI-MADI units to address the multi-format audio needs of the Fox Sports International (FSI) channel.

The four new C10 consoles, in control rooms ACR 1, PCR 3, 4 and 5, join the existing C10 with in ACR 2 to complete the audio installation. The MORSE system allows any room to pull up a microphone from a variety of sources within the facility, while the MADI backbone is the pathway for the consoles to connect to other third-party devices. 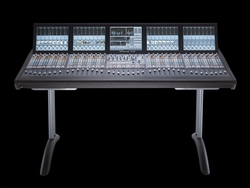 The system setup at the NE&O facility allows an operator to take audio from a variety of sources and prepare and mix them for output to FSI. As inputs to the system can come in varying forms, including multiple language streams and live commentary, the C10-based network allows an engineer to get a quick handle on what is being presented, reformatted and routed. Another critical tool is the powerful Dialogue Automix feature that allows for the automated control of multiple mics for studio based pre- and post-event discussion shows.