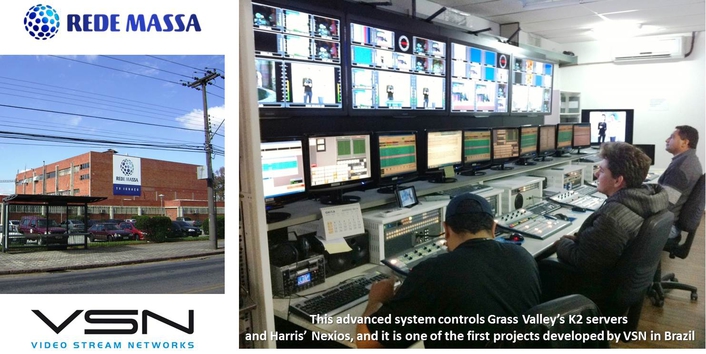 Three complete VSNMULTICOM Master Control automation systems were succesfully implemented in 2010 in Rede Massa
The project is based on the VSNMULTICOM suite of applications as the central system for broadcasting management. It controls Nexios HD servers (instead of the previously instaled GV’s K2 for ingest and broadcasting), tres 4S’ 1800 Master Switcher, a Capela switch master from Thompson, a couple of Betacam VTRs and a character generator. The platform is formed by two VSNMULTICOM REC REMOTE ingest control station, two VSNMULTICOM SCHEDULER stations for playlists creation, and four remote VSNMULTICOM REMOTE rundowns monitoring stations, that control the broadcasting of the air SD channel, the air HD channel, and the One Seg. channel.

“VSN's solution is solid and reliable. The users didn't have any problem to adapt to the new system after the training. The implementation process was very simple and VSN had total flexibility to change the workflow's configuration, showing a total knowledge of the automation process. The post-sales process and the support services have been very good, and the technical attention is efficient. We have recommended VSN's technology, and we will continue to do so”, declared Sok Won Lee, Engineering Director at Rede Massa. 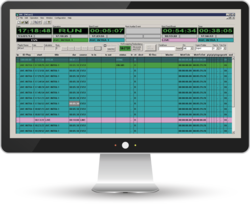 Mario Díaz, Sales Director at VSN, has declared that “it was very important that in 2010 Rede Massa, after a complex process of selection, chose VSN to manage the advertising broadcast of its three air channels, with national coverage. This was a key step for the consolidation of VSN in the Brazilian market, where nowadays we have important clients that have trusted in out complete system for News, Media Asset Management, Production Asset Management, Deep Archive, Master and Studio Automation, Traffic-Scheduling and graphic generation, among others”.

Rede Massa is one of the most important channels in the Brazilian state of Paraná, whose population reaches almost 12 million, and has it headquarters in the capital, Curitiba. It is formed by five affiliated stations in the state:TV Iguaçu (Curitiba), TV Tibagi (Apucarana y Maringá) , TV Cidade (Londrina) and TV Naipi (Foz de Iguaçu), and, in August 2012, the operations of the fifth station of the group, TV Guará, in Ponta Grossa. Five radios are also part of the group: Massa FM de Curitiba, Maringá, Londrina, Paranaguá, Cascavel and Campos Gerais. This is one of the most important projects that VSN has developed in the Latin American market and it celebrates its 5th Anniversary this year.