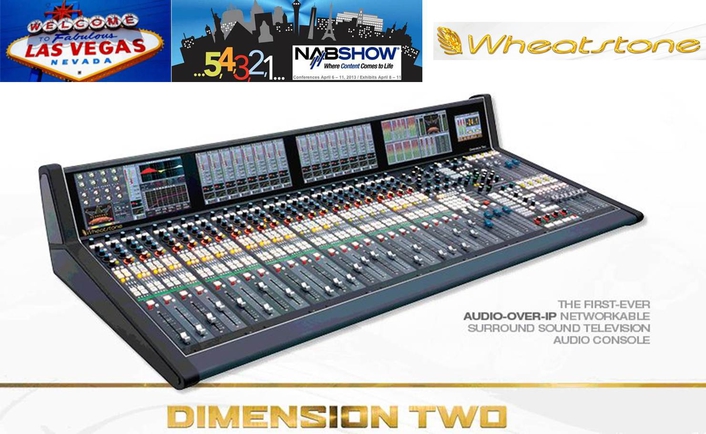 Dimension Two: Large Format IP-based control surface
Converge on IP distribution and storage for all your multi-use content. Wheatstone’s new Dimension Two is the first IP-based audio console for TV that uses the same distribution technology as emerging video delivery systems. New IP intelligent nodes mean you can manage audio where you need it, at point-of-use instead of routed through a centralized cage system with associated infrastructure costs. What used to take a mountain of wire now comes down to one Ethernet cable.

Overview:
Wheatstone’s new large-format Dimension Two is the first TV audio console that uses the same IP technology as emerging video distribution systems for converging on one standardized routing format for all your audio and television content. And, unlike proprietary centralized card-cage networks, the Wheatstone IP network used by our Dimension Two console is distributed—intelligent IP nodes are placed at point-of-use, or multiple locations in the network for originating or delivering audio where you need it. 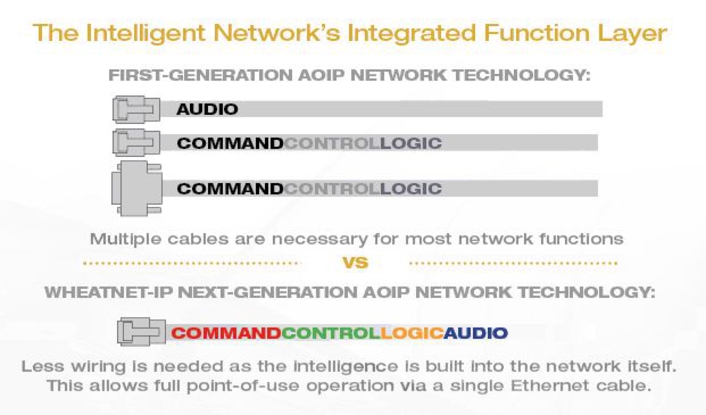 Only Dimension Two uses IP Ethernet distribution for exceptional cost efficiencies and failsafe redundancy. A distributed and intelligent network means no more centralized points of failure, plus more points of recovery. What used to take several dozen wires now requires one Ethernet cable for most audio routing and logic functions.

Add new convergent IP connectivity, plus plenty of busses, wider than standard display, and built-in loudness meter, and the result is the most capable, networkable audio console for today’s TV studio.

Also new is an LKFS meter for loudness monitoring built into the overbridge display, and the ability to turn any fader into a master to easily control groups of inputs.

About Dimension Two IP Audio Delivery:
Wheatstone’s new Dimension Two TV audio console uses Wheatstone’s proven audio-over-IP technology as its audio delivery system. IP is the standard of choice for existing and emerging video delivery systems and offers huge benefits for moving content around in terms of speed, access, control and infrastructure costs. IP is a standard delivery technology used in the majority of networks today because of its resource accessibility and affordability characteristics. With the new Dimension Two console, you can pot up any source from anywhere in the facility plus bring along with it all the associated logic needed for functions like turning mics on and off or setting faders.

Dimension Two IP Delivery Benefits
Standardize on one delivery system for video and audio. Only the Dimension Two TV audio console uses audio over IP, the same technology used by emerging video delivery systems.
Manage audio where you need it, at point-of-use instead of routed through a centralized cage system and all the associated infrastructure costs that come with it.
Create more delivery channels for your programming, instantly. Wheatstone’s IP network has advanced routing features so you can add channels for multipurpose use without adding to the payroll.
Go with a stable network. The Wheatstone IP network distributes the workload to all access points in the system for better overall network stability.
Avoid costly system failures. A distributed and intelligent network means no more centralized points of failure, plus more points of recovery. Every intelligent node is self-aware, and can reconfigure itself in an emergency. In fact, each intelligent node in the network can recover settings for your entire studio operation!
Expand your network at any time, for less. With control and intelligence built into every intelligent node, you already have most of the network-ability you need to grow with the times.