Fineline Gets the Avolites Arena Spirit 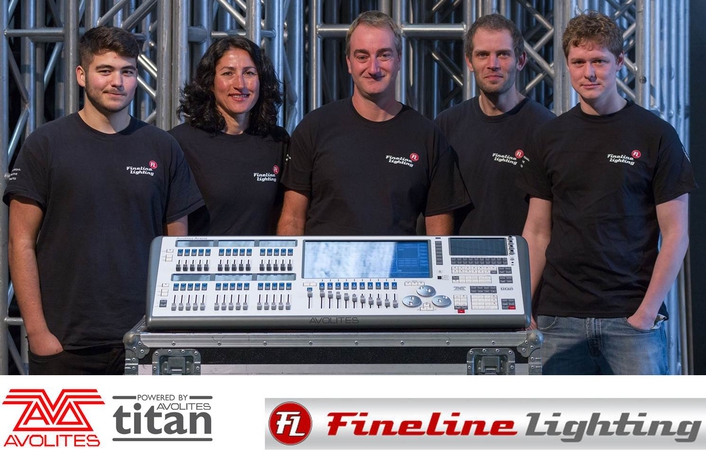 Bristol based lighting, rigging and video rental specialist Fineline is the first UK Company to purchase one of Avolites’ new Arena lighting consoles - serial number 001 - a cool and innovative product launched earlier in the year at the Prolight+Sound Expo in Frankfurt.

Fineline has been a big investor in Avolites control, particularly in the last two years explains MD Rob Sangwell, with a selection of Tiger Touch, Tiger Touch Pro, Quartz and Pearl Expert ranges in their hire stock which are constantly in use. “Avo has always been a powerful and simple to use control surface,” says Rob, “And apart from making some of the best ‘live’ consoles on the market, the service and backup has also been fantastic!”

Stuart England, Fineline’s Operations co-ordinator said, “The Arena ticks all the boxes for us. It builds from the popular Tiger Touch operating architecture … with extra faders to retain that old skool buskability for which Avo desks are famously well loved, together with plenty of innovative new and updated features  … so this will keep many LDs happy”.

He adds that the additional touch screen and four playback pots will work well with Key Frame Shapes, a new feature in V9 of Avo’s robust Titan OS.

From a technical standpoint, Stuart adds that the internal network switch and UPS reduce the amount of kit needed at FOH and simplifies the plug up – less clutter, more space and more room to work smart at FOH!

The built in opticalCON makes it future proof in an era where more and more shows are using pixel mapped fixtures that are hungry on DMX universes!

Stuart also underlines Rob’s comments about the great support from Avo. “They are there for you any time of day or night and understand the pressures and challenges involved in any live situation plus the fact that … the show must go on whatever! This is as important as the product itself”.

Being designed for festivals, theatres and anywhere needing a larger control surface, the Arena is just the right size for Fineline’s current workload, and has plenty of headroom to allow LDs to create the most interesting shows!

It combines the popular Tiger Touch II interface with 30 additional Playback faders plus expanded live control options and features. A second touch screen alongside the main display provides an additional workspace window, and more labelling for the adjacent macro buttons and rotary pots. These fully assignable playback encoders allow intuitive control of channels and effects. The six LCD screens display electronic legends for 30 faders, for quick and easy access to all the playbacks, fixtures and palettes.

Rob is also impressed by the networking facilities, “Especially useful for festival scenarios” where they are running ‘house’ and production lighting systems, with artists bringing in floor  and specials packages that can be accommodated really easily and effectively.

Fineline has also recently been using its Avolites AI servers to run video for a variety of shows. “It’s a great brand with a solid history, a great reputation … and some fabulous people,” concludes Rob.

The Avolites Arena is available to hire now from Fineline Lighting.