On-the-go camera operators from around the world have relied on Sachtler’s long legacy of robust tripods and rapid system set ups.  While Sachtler has been a favorite among shooters working in news and documentaries, select filmmakers have also come to admire the brand’s versatility and ability to handle heavier and lighter camera rigs with a single tripod system. This includes UK-based cameraman and filmmaker Paul Cook, who relied on the new Sachtler FSB 10 System for his latest film, Magpie.

“It was a relief to have a tripod system that never hindered the camera team or limited my intended movement of the camera,” commented Cook. “When you work with tight budgets, you often have to sacrifice certain shots or methods of shooting if your equipment doesn’t allow for them, but Sachtler’s FSB 10 made it very easy to turn up each day on set and attempt any shot no matter the weight and size of the camera package.”

Set against the backdrop of World War II in East Anglia, Magpie tells the story of three people whose lives are forever altered by the vast changes in the physical, social and cultural landscape of the region during the war. During production, Magpie featured dramatic sets and powerful characters that Cook had to capture under an intense shooting schedule.

“I used the FSB 10 for all 12 days of shooting – 10 of which were consecutive – so I became very accustomed to and subsequently dependent on its qualities and ideal uses. During production, it balanced and moved our heavy FS7 cinema setup with smooth, controlled motion, making it a great balance of simplicity and functionality. It’s an incredibly quick, reliable and sturdy support system, so it’s a great match for any fast-moving environment, whether that’s corporate jobs, documentary work, or a low-budget independent film like ours.”

Even though unexpected problems are always lurking on every set, Cook emphasizes a simple yet crucial step in the production process.

“Planning and preparation are what make or break a film project like this. If you can foresee what obstacles you may run into and plan ahead, they will be far less likely to turn into a problem later down the line. On something low budget like our project, it comes down to what you know, who you’re working with, and how you tackle those issues together. For me it was essential to put together the right crew for the job, and on Magpie this meant a crew that shared our passion for the project and understood our vision.” 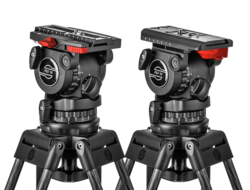 About the FSB 10:
Extending the renowned FSB family, the FSB 10 fluid head is a new entry-level 100mm solution for work in news, documentaries, wildlife, and everything in between. Backed by solid German engineering, the FSB 10 is an affordable introduction to the 100 mm class and perfectly supports today’s digital cinema-style cameras, such as the Sony FS7, Canon’s C500, and the Blackmagic Ursa Mini. With a higher payload than the FSB 8, the FSB 10 allows users to employ a wider range of system configurations using a convenient Sideload interface or Touch and Go interface.

About Sachtler
Sachtler, a Vitec Group company, was founded in 1958 by camera operator Wendelin Sachtler and is a worldwide market leader of premium camera support systems for broadcast and cinematography production. Together with the hottest cameras by Sony, Blackmagic Design, Panasonic, ARRI, Canon, etc., the fast, robust and reliable Sachtler tripod heads, tripods, pedestals and camera stabilizer systems engineered in Germany help camera operators all over the world to provide stunning footage. The Sachtler name and brand is a symbol of top quality and reliability for decades. With an extensive range of premium camera support systems and professional video and audio bags, Sachtler is the highly qualified partner for broadcast, documentary, film, and pro-video applications.