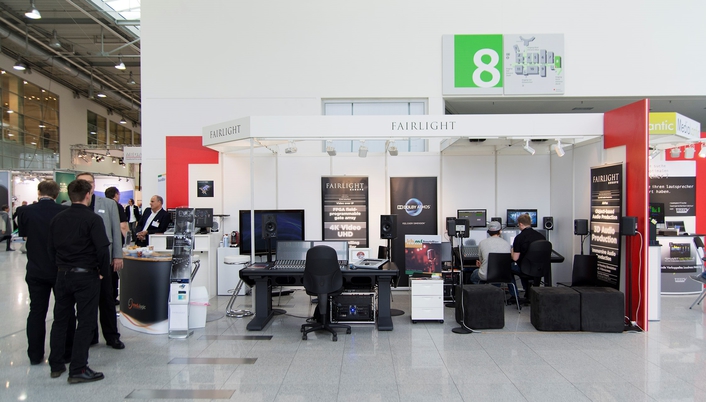 Fairlight’s innovative 3D Audio Workspace for immersive mixing supports outputs in multiple 3D audio formats
Fairlight’s 3DAW (3D Audio Workspace) is unique in being able to create custom Surround and 3D bus formats allowing users to be able to generate content in any current format and output in multiple formats. As 3DAW is an open platform it also supports integration of any possible future formats.

„We’re not locking you into one specific output format. If you’re mixing with the Fairlight system you can mix once, you mix immersively in 3D, you’re monitoring in 3D and at the end of it, you decide if you want to output as a Dolby Atmos mix, an Auro-3D mix or a DTS MDA mix. We support a philosophy of mixing once and then outputting many times in many different formats.“ (Tino Fibaek, CTO Fairlight) 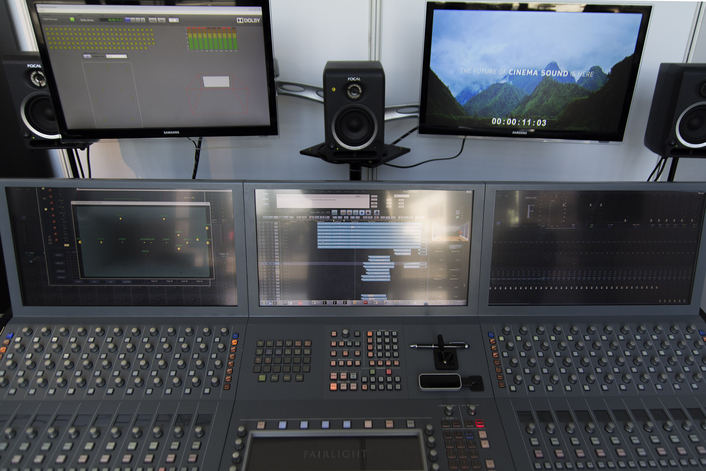 At TMT 2014 in Cologne Fairlight demonstrated for the first time in Europe a Dolby Atmos mix in 3DAW on an EVO mixing console. As the Fairlight system already has MADI I/O and Ethernet connections on board, you can patch the audio directly to the Dolby RMU sending the panning information for the objects over IP. Natively every channel in Fairlight 3DAW has its own 3D panning engine which can translate to Dolby Atmos.

This allows the user to mix natively in the Fairlight using the advanced and innovative panning tools and have this information replicated in the Dolby RMU. From the Fairlight the user can monitor both the Input signal to the RMU and the Output of the RMU. In combination with using AirPan, Fairlight allows the user to work with powerful and user friendly tools to create a final Dolby Atmos Mix. Mixing in Dolby Atmos has never been easier or more intuitive.

„We were delighted about the support of Dolby at the Tonmeistertagung 2014 in Cologne and the possibility to demonstrate a live Dolby Atmos mix in Fairlight’s 3DAW environment with its innovative operating concept. We have received a lot of interest and positive feedback from our customers.“ (Robert Trebus, CEO Fairlight Europe) 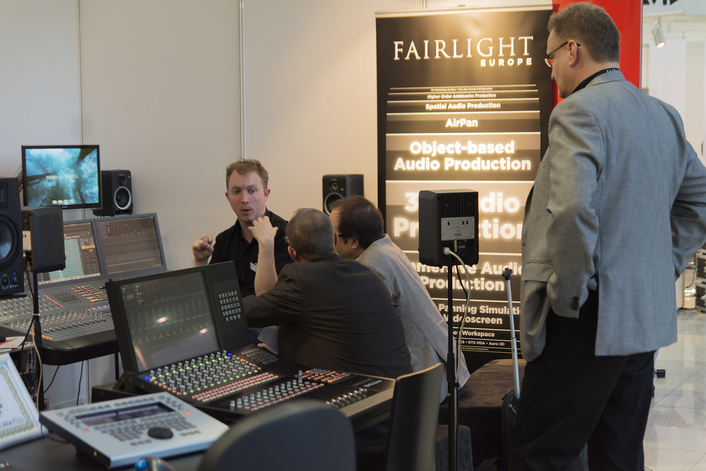 As Fairlight’s 3DAW is an open platform it is also possible to extend its functionality to other DAWs. Using the 3DAW plugin to communicate from an external program to a Fairlight allows the user to mix in their preferred platform of choice while having full access to the innovative and intuitive 3D audio tools from Fairlight. Also due to its extensive 3D monitoring section these tools can work in conjunction with a studio’s already existing analog or digital Surround console. Besides Dolby Atmos®, Fairlight’s 3DAW also supports other 3D audio formats such as DTS MDA® and Auro-3D®.

About Fairlight
Fairlight has been designing, engineering and manufacturing cutting edge, professional digital audio technology for more than 30 years. Its dedication to innovation, quality and customer service has made Fairlight one of the most respected companies in professional audio. With their integrated control surfaces and intuitive user interfaces, Fairlight's award-winning media creation tools are renowned for their speed, flexibility and exceptional sonic quality. The company's products offer full compatibility with virtually all open audio, video and sync standards, making them ideally suited to a wide range of audio post and live broadcast applications. Fairlight Europe is part of the Berlin-based Media Logic GmbH and responsible for European sales and support of Fairlight products.