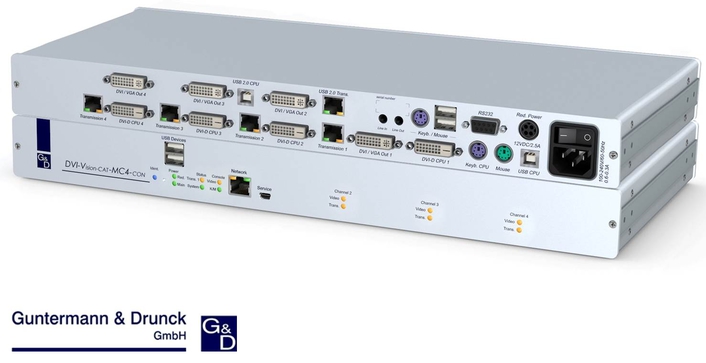 Extended range of function including new functions for operation and safety

Operation via on-screen display or web interface and other features such as proactive system monitoring and the possibilities provided for the operation within a matrix are real-added value to users of the new DVI KVM extenders DVI-Vision-CAT and DVI-Vision-Fiber.

KVM extenders can be used in the most versatile applications. Reasons to remove computer equipment from workspaces often have to do with ease of use: along with computers, noise and heat vanish from the user environment. Especially applications exposed to rough environments benefit from moving sensitive computer systems into protected areas. Applications where computers cannot be easily accessed for administration or where systems need to be placed in a central, secure room benefit from KVM extenders, too.

Compared to remote operation based on a network, which requires additional software on the computer and furthermore uses unsecure data transmission via network structures, KVM extenders let users operate their computers remotely without any latency. For several years now, the extender series DVIVision and FIBREVision have been setting standards. They transmit single-link DVI signals (up to 1920 x 1200 @ 60 Hz) and their latency-free transmission give users the feeling of working directly at the remote computers. Here, the good mouse performance is a major contribution to an optimal hand-eye coordination.

DVI continues to be standard in many areas
Despite numerous new video formats, DVI interfaces are expected to be the standard for many applications for a long time. A good reason for G&D to completely overhaul their systems. The basic functions of the extender series DVI-Vision-CAT and DVI-Vision-Fiber remain the same: depending on the existing infrastructure or the distance to be bridged, transmission is carried out using CAT cables or optical fibres (previously called FIBREVision) thus bridging distances up to 10,000m. And as is the case for all G&D equipment, the full video resolution is provided without any latency across the entire transmission distance.

A local console is indispensable for the direct administration of the computers. By default, G&D’s extender systems, even the transmitter connected to the computer, offer the possibility to additionally connect keyboard, mouse and display. Now administrators and users are able to access the system at the same time even when being assigned with different rights.

Safer and more flexible
Since extenders are usually applied in mission-critical environments, reliability often is considered a decisive factor. Hence, in addition to their robust design, G&D systems are always equipped with a redundant power supply.

On top of that, the new DVI-Vision extensions come with G&D’s premium monitoring system. The devices offer the possibility to use two network interfaces to communicate with the outside. This way, users are not only able to configure system parameters via the integrated web interface, but also read out the device status. And with the support of SNMP, status changes or critical status values (e.g. a video signal that is no longer available at the computer) can be actively forwarded via SNMP trap. The integrated SNMP agent can be used to actively query status information.

To operate and configure the plug & play devices even more easily, they now offer an on-screen display in addition to the new web interface.

Another function, which enjoys great popularity in control rooms, is the Screen-Freeze function. If a source loses the video signal, the KVM receiver "freezes" the last displayed image of the monitor. This state is highlighted by a red semi-transparent frame. Despite being provided with static information only, instead of sitting in front of a blank screen, in the best case scenario users are able to continue their work until the display again receives an active signal.

To be prepared for growing installations, the integrated matrix support turns the DVI-Vision into a future-proof investment. This way, it is possible to include extenders at a later point into one of the digital G&D matrix systems within an existing installation. Thus, users benefit from more flexibility through distributed access - and any existing components can still be used as before.

Comprehensive features
By default, DVI-Vision-CAT and -Fiber transmit the signals keyboard and mouse (USB and PS/2) as well as DVI video (up to 1920 x 1200 @60 Hz), audio and RS232. Depending on the variant, signals are transmitted via CAT cables or optical fibres. A basic system already includes all features required for operation and safety. Variants that additionally support transparent USB 2.0 transmission or multi-channel video (up to four video interfaces per computer) complete the range of features.

How DVI-Vision-CAT/-Fiber work: The KVM transmitter (CPU) is connected to the external interfaces of the computer and, depending on the variant, transmits signals via CAT cables or optical fibres to the remote workstation (CON), which can be placed up to 10,000 m away from the transmitter. Both the transmitter and the receiver can be provided with keyboard, mouse, display, etc. This way, users are able to operate and administrate the system from both units.